Join us on Wednesday, June 29th, at 7 pm for an in-person event with Julia Glass in conversation with Ben Shattuck as they discuss Vigil Harbor and Six Walks: In the Footsteps of Henry David Thoreau. 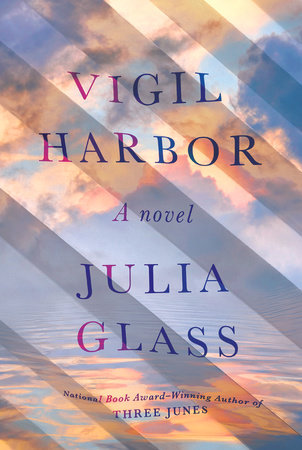 A decade in the future, in the historic town of Vigil Harbor, there's been a rash of divorces among the yacht-club set; a marine biologist despairs at the state of the world; a spurned wife is bent on revenge; and the renowned architect Austin Kepner pursues a passion for building homes to withstand the escalating fury of coastal storms. When two outsiders come to town — one a woman determined to solve the disappearance of a long-lost lover who links her to Austin, the other a man with subversive charms — the fates of Vigil Harbor's residents become intertwined on one remarkable day and a long-held secret involving a selkie comes to light.

JULIA GLASS is the author of six previous books of fiction, including the best-selling Three Junes, winner of the National Book Award, and I See You Everywhere, winner of the Binghamton University John Gardner Fiction Book Award. A recipient of fellowships from the National Endowment for the Arts, the New York Foundation for the Arts, and the Radcliffe Institute for Advanced Study, Glass is a Distinguished Writer in Residence at Emerson College. She lives with her family in Marblehead, Massachusetts.

BEN SHATTUCK, a former Teaching-Writing Fellow and graduate of the Iowa Writers’ Workshop, is a recipient of the PEN/Robert J. Dau Short Story Prize and a 2019 Pushcart Prize. He is the director of the Cuttyhunk Island Writers’ Residency and curator of the Dedee Shattuck Gallery. His writing can be found in the Harvard Review, The Common, the Paris Review Daily, Lit Hub, and Kinfolk Magazine. He lives with his wife and daughter on the coast of Massachusetts, where he owns and runs a general store built in 1793. His memoir, Six Walks:  In the Footsteps of Henry David Thoreau, was published in April.

When two unexpected visitors arrive in an insular coastal village, they threaten the equilibrium of a community already confronting climate instability, political violence, and domestic upheavals—a cast of unforgettable characters from the rich imagination of the National Book Award–winning, best-selling author of Three Junes.

Six Walks: In the Footsteps of Henry David Thoreau (Hardcover)