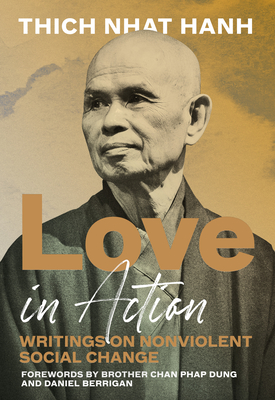 "The essence of nonviolence is love," Thich Nhat Hanh says. "Out of love and the willingness to act selflessly, strategies, tactics, and techniques for a nonviolent struggle arise naturally." Collecting essays written by Thich Nhat Hanh at crucial moments of social transformation, Love in Action is an important resource for anyone engaged in social work, community organizing, political action, and cause-oriented movements.

Reflecting on the devastation of war, Thich Nhat Hanh makes the strong argument that ethics and altruistic love based on mindfulness and insight are the only truly sustainable bases for political action. Having played a central role in the Buddhist nonviolent movement for peace in Vietnam during the 1960s and serving as Chair of the Buddhist Peace delegation to the Paris Peace Accords in 1973, Thich Nhat Hanh speaks with the voice of experience: "There is no way to peace. Peace is the way."

Together with essays on the connections between outer engagement and the inner work for peace, this anthology also features poetry and the script of the hauntingly beautiful 1972 play, The Path of Return Continues the Journey. The play's characters are drawn from the author's own life, the young men and women of his School of Youth for Social Service--many of whom were killed for their social actions. "At 12:30 a.m. on July 5, 1967, in the village of Binh Phuoc, Gia Dinh Province, a group of strangers abducted five young men, brought them to the bank of the Saigon River, and shot them," reports Thich Nhat Hanh. "All five were volunteer workers in the School of Youth for Social Service, a nonviolent organization that sought only to heal the wounds of war and reconstruct the villages." An elegy and a prayer for peace, the script shows a less-known side of the young Thich Nhat Hanh: grieving, profoundly in touch with his sorrow and pain, and channeling his anguish into art, inspired by love.

THICH NHAT HANH is one of the most revered and influential spiritual teachers in the world today. Born in Vietnam in 1926, he became a Zen Buddhist monk at the age of sixteen. Over seven decades of teaching, he has published more than 100 books, which have sold more than five million copies in the United States alone. Exiled from Vietnam in 1966 for promoting peace, his teachings on Buddhism as a path to social and political transformation are responsible for bringing mindfulness to the West. In 1982 he established the international Plum Village Community of Engaged Buddhism in France, now the largest Buddhist monastery in Europe. He lives in Hue in Central Vietnam.

"Love in Action is one of Thich Nhat Hanh's most important books. Love in Action refreshes our awareness that the eminent Zen Buddhist teacher, Thich Nhat Hanh or 'Thay' exemplifies contemplation in action. We are reminded that Thay was an early exponent of a broad movement called Engaged Buddhism. Thay’s activism embraces gender equity, environmentalism, refugee support, and peace movements. Love in Action helps us walk the path of mindfulness and activism.”
—The Rt. Rev. Dr. Marc Handley Andrus, eighth bishop of the Episcopal Diocese of California and author of Brothers in the Beloved Community

"These are the writings of a contemporary saint."
—Inquiring Mind

"In calm but forceful prose, Thich Nhat Hanh articulates the central teaching that violence originates in each person … and that with the practice of meditation and mindfulness it can be overcome."
—The San Francisco Chronicle