Searching for the Snow Leopard: Guardian of the High Mountains (Hardcover) 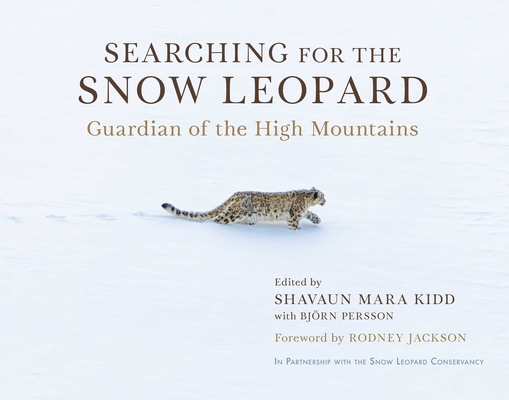 A stunning visual and personal journey in search of the iconic big cat, the snow leopard.

The snow leopard, known as the ghost of the mountains, is an elusive predator that has captured the human imagination for eons. Yet, by nature secretive, living at altitudes of up to 19,000 feet in one of the world's harshest environments, it is notoriously difficult to see. Those lucky enough to encounter one speak of the experience as momentous, transformative, even spiritual. In this handsomely illustrated, eloquent book, published in partnership with the Snow Leopard Conservancy, world-renowned wildlife photographers, naturalists, and conservationists take the reader closer than most humans will ever get to knowing snow leopards and understanding why these beautiful big cats have for so long been considered the most mysterious of all.

More than 130 breathtaking photographs—all taken in the wild, and none with camera traps—accompany personal narratives and anecdotes that convey the experience of learning to see; the patient pursuit, following the tracks and other sign for a momentary glimpse; an unexpected encounter; watching the predator hunt; a magical moment with a mother and her cubs. A special "seek and find" section challenges readers to spot the snow leopard—to discern camouflage from rock and snow. The text also relates the natural history of the snow leopard, its cultural significance and place in lore, its interactions with local peoples, and information about its conservation.

Shavaun Mara Kidd is the outreach conservation educator for the Snow Leopard Conservancy and serves as its social media manager. In these capacities, she speaks to a wide variety of audiences about the snow leopard and its conservation and maintains the conservancy’s presence on a variety of platforms. She lives in Milan, Illinois.

Björn Person is an internationally renowned photographer who, apart from seeking spectacular images of this planet’s beautiful wildlife, is committed to documenting and raising awareness about threatened species. He has used his camera as a weapon against wildlife poaching and is a sponsor of wildlife conservation. He is based in Stockholm, Sweden

Rodney Jackson, director of the Snow Leopard Conservancy, is widely considered the leading world expert on the snow leopard, having devoted more than thirty years to researching and conserving this elusive cat in South and Central Asia. Upon receiving the 1981 Rolex Award for Enterprise, Jackson launched a four-year, pioneering radio-tracking study of snow leopards in the Nepalese Himalaya that led to a June 1986 cover story in National Geographic. He was a finalist for the Indianapolis Prize in 2008, 2010, 2012, 2016, and 2018. Today, he mentors a new generation of conservationists and continues to work with the local people. He lives is Sonoma, California.

"For me, the snow leopard represents that precious part of us—mystical and often hidden from the world—that holds great power. Spending time in her world and finally seeing her was like a dream, one that continues to empower me."—Jack Wonderly