The Man-Eaters of Tsavo (Paperback) 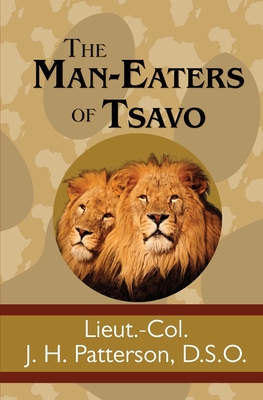 "Darkness fell almost immediately, and everything became extraordinarily still. The silence of an African jungle on a dark night needs to be experienced to be realised; it is most impressive, especially when one is absolutely alone and isolated from one's fellow creatures, as I was then."

In the late 19th century, the British began construction on a railway linking Uganda with the Indian Ocean. The railroad's passage through Africa crossed over the Tsavo River in Kenya, and thus the British Army brought Lieutenant-Colonel John Henry Patterson in to lead the thousands of workers as they began the bridge's construction. Throughout the next nine months, the construction site encountered a pair of lions that would stalk the campsite, drag workers from their tents, and devour those workers at nighttime. The killings occurred daily and the lions became bolder with each passing week. Nothing seemed to work for Patterson to stave off the lion attacks.

Patterson published The Man-Eaters of Tsavo in 1907 to chronicle those nine months where the lion attacks intensified to the point where the bridge's construction had to be halted. Included in Patterson's account of the "Man-Eaters at Tsavo" are other stories from his time in East Africa.