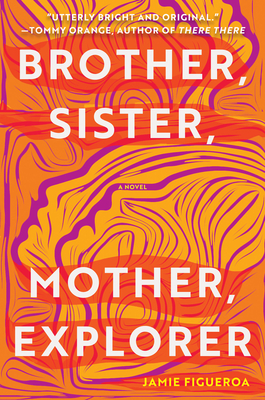 An almost dreamlike story of grief and trauma of two half siblings in the southwest, mourning the death of their mother over a weekend. They are haunted by ghosts of the past, a hard life from childhood, their mother’s strange behavior and the Explorer’s abuses. As part of a pact on leaving town, the siblings perform in the plaza to earn enough money from white tourists who don’t really see them, but rather romanticize their struggle and poverty.

“One of a number of excellent debut novels already out in the still-new year, this is a singular work. Taking on the coming-of-age from young adulthood into something deeper and more mature, the story follows a sister and brother as they reckon with their mother’s passing and begin to understand what life should and should not be as it gets lived. Their tourist town of Ciudad de Tres Hermanas gives us not only a vivid picture of the present but casts a knowing eye on the layers of the past. Beautifully done.”
— Rick Simonson, The Elliott Bay Book Company, Seattle, WA

Shortlisted for the Reading the West Book Award

A fableistic, "beautifully crafted, poetic" debut novel of enormous power and grace about a sister trying to hold back her brother from the edge of the abyss for readers of Jesmyn Ward and Tommy Orange (The New York Times Book Review).

In the tourist town of Ciudad de Tres Hermanas, in the aftermath of their mother's passing, two siblings spend a final weekend together in their childhood home. Seeing her brother, Rafa, careening toward a place of no return, Rufina devises a bet: if they can make enough money performing for privileged tourists in the plaza over the course of the weekend to afford a plane ticket out, Rafa must commit to living. If not, Rufina will make her peace with Rafa's own plan for the future, however terrifying it may be.

As the siblings reckon with generational and ancestral trauma, set against the indignities of present-day prejudice, other strange hauntings begin to stalk these pages: their mother's ghost kicks her heels against the walls; Rufina's vanished child creeps into her arms at night; and above all this, watching over the siblings, a genderless, flea-bitten angel remains hell-bent on saving what can be saved.

Jamie Figueroa received her MFA in creative writing from the Institute of American Indian Arts. Her writing has appeared in Epoch, McSweeney's, and American Short Fiction. She is the recipient of the Truman Capote Scholarship and is a Bread Loaf scholar. Boricua by way of Ohio, Figueroa lives in northern New Mexico.

Shortlisted for the Reading the West Book Award
A Good Morning America Must-Read Book of the Month
A Library Journal Title to Watch
Named a Most Anticipated Book of the Year by Bustle, Electric Literature, The Millions, and more.

"Brother, Sister, Mother, Explorer is so full of voice. It is utterly bright and original." —Tommy Orange, author of There There

[A] beautifully crafted, poetic book. Having read Brother, Sister, Mother, Explorer, maybe the next time you travel, you might recall that what you see is not all there is. You might see yourselves as Jamie Figueroa sees you, apart from and yet a part of our common human condition." —Esmerelda Santiago, The New York Times Book Review

"This debut has been pitched as a cross between Jesymn Ward and Tommy Orange. While some comparisons are a stretch, this book is actually a perfect blend of those two authors. In style and content, Figueroa manages to capture what makes those authors shine. She invites readers into a family where a sister is doing everything in her power to keep her brother from destructing. Figueroa’s prose is soft yet completely powerful. As the family course corrects spinning out of control after the mother dies, readers will feel their pain on every page." —Adam Vitcavage, Debutiful

"Jamie Figueroa‘s Brother, Sister, Mother, Explorer is an exquisite debut, filled with rich imagery and lyrical prose. Figueroa packs plenty into the novel’s modest page count, with characters both tangible and all-but magical bursting off the page . . . Brimming with elegant, poetic writing, Figueroa has offered us a truly original debut. An absolute must read. —Jodie Sloan, The AU Review

"Curious and dazzling . . . Figueroa's omniscient, second person narration creates an intimacy while the hypnotic rhythm of her prose and evocative mystical elements invoke an archetypal sense that is at once out-of-time and thoroughly contemporary as we grudgingly recognize our own precarious epoch." —Booklist (starred review)

"[A] masterly debut . . . Though the novel brims with spellbinding prose, magical elements, and wounded, full hearted characters that nearly jump off the page, its most remarkable feature is perhaps its piercing critique of the white Anglo tourists’ tendency to romanticize people of color, as well as Figueroa’s examination of the traumatic effect this attitude can have on those who are deemed 'the Other.' This cleverly constructed and deeply moving account enthralls." —Publishers Weekly

"Brother, Sister, Mother, Explorer combines folklore with magical realism in a manner reminiscent of Toni Morrison’s Beloved. Along with ghosts who appear as recurring characters, the prose is cut with imagery and metaphor in rhythmic patterns, adding another otherworldly element to the story . . . Figueroa addresses important issues, including depression, suicide and personal and generational loss, with nuanced insight. She also skewers the tendency of white Americans to exoticize people with darker skin, portraying the impact of this prejudice in a deeply stirring manner. A lyrical contemplation of how we can never run away from our past, Brother, Sister, Mother, Explorer is an exquisitely woven story about resilience and trauma." —Rabeea Saleem, Bookpage

"Gorgeously rendered, with familial and ancestral history braided into contemporary events, this study of memory and grief features a young woman trying to pull her brother back from the edge after their mother’s death." —Library Journal

"Brother, Sister, Mother, Explorer is a haunting of a novel centered around the hustle of an utterly unforgettable brother and sister. Jamie Figueroa's faultless language surprises, enchants, and does nothing less than articulate that which is unseen and eaten by profound grief. Supervised by a wild, booted angel (a character for the ages), this marvel of a first novel seems powered by a force that wrecks itself and is made glorious, again and again, until its stunning conclusion. Singular, devastating, and divine." —Marie-Helene Bertino, author of Parakeet

"In language that is blade-sharp and sun-bright, Jamie Figueroa weaves a story of generations of love and loss that is powerful and aching and utterly new. Brother, Sister, Mother, Explorer will never, ever leave me." —Ramona Ausubel, author of Sons and Daughters of Ease and Plenty and No One Is Here Except All of Us