In Pursuit of Spenser: Mystery Writers on Robert B. Parker and the Creation of an American Hero (Paperback) 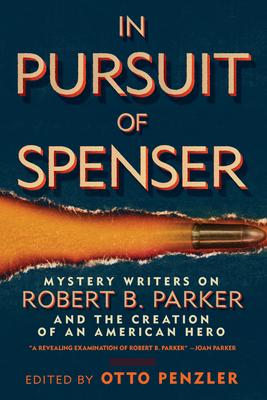 When Robert B. Parker passed in early 2010, the world lost two great men: Parker himself, iconic American crime writer whose books have sold more than 6 million copies worldwide, and his best-known creation, Spenser. Parker's Spenser series not only influenced the work of countless of today's writers, but is also credited with reviving and forever changing the genre.

In Pursuit of Spenser offers a look at Parker and to Spenser through the eyes of the writers he influenced. Editor Otto Penzler-- proprietor of one of the oldest and largest mystery specialist bookstores in the country, New York's The Mysterious Bookshop, and renowned mystery fiction editor whose credits include series editor for the Best American Crime Writing and Best American Mystery Stories, among many others (and about whom Parker himself once wrote, "Otto Penzler knows more about crime fiction than most people know about anything")-- collects some of today's bestselling mystery authors to discuss Parker, his characters, the series, and their impact on the world.

From Hawk to Susan Silverman to Jesse Stone and Sunny Randall, from the series' Boston milieu to Parker's own take on his character, In Pursuit of Spenser pays tribute to Spenser, and Parker, with affection, humor, and a deep appreciation for what both have left behind.

Otto Penzler, who graduated from the University of Michigan, wrote 101 Greatest Movies of Mystery and Suspense (2000). For the New York Sun, he wrote The Crime Scene, a popular weekly mystery fiction column that ran for several years. He has worked with several outstanding authors including Elmore Leonard, Nelson DeMille, Joyce Carol Oates, Sue Grafton, Mary Higgins Clark, Robert Crais, Michael Connelly, James Lee Burke, and Thomas H. Cook. Located in Tribeca, The Mysterious Bookshop is one of the oldest and largest mystery specialist bookstores in America.

"A close and revealing examination of Robert B. Parker—the author, the man, and the husband—brought to life by the observations and insights of fellow authors who knew him and his work. Extraordinary!"
—Joan Parker

"Robert B. Parker, the man widely credited with reviving the hardboiled PI genre, gets the respect he amply deserves in this anthology. Editor Penzler . . . provides a thoughtful introduction that sets the stage for insights into a wide range of topics, including the role of food in the Spenser books, TV adaptations, and the series' Boston setting. Every piece is worthwhile."
—Publishers Weekly

"The fourteen essays here examine Spenser's place in the literary genre and anatomize the aims, techniques, and achievements of his creator . . . Included, too, are commentaries on Spenser's accepting—but never self-abasing—attitudes toward race and sexuality."
—ForeWord Reviews

"A festschrift in honor of the iconic Parker, who died in 2010 . . . the collection delves into all things Spenser and Parker, with side trips for Parker's westerns and Jesse Stone series. Susan Silverman, Hawk and Boston also get their due."
—Shelf-Awareness.com

"A baker's dozen of crime and mystery writers—including Loren D. Estleman, Lyndsay Faye, Gary Phillips, Max Allan Collins and S.J. Rozan—who look back on the author's award-winning body of work, his Boston milieu, his continuing players and any influences his fiction had on their own."
—Kirkus Reviews