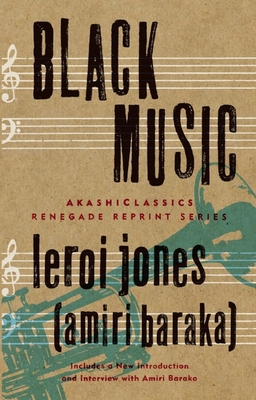 The long-awaited reissue of the sequel to Amiri Baraka's seminal work, Blues People.

Baraka writes with the passion and lyricism that can only come from a jazz critic who is uncompromisingly invested in the social and aesthetic dimensions of the music.
--WBGO (Newark Public Radio)

Jones has learned--and this has been very rare in jazz criticism--to write about music as an artist.
--Nat Hentoff

LeRoi Jones (now known as Amiri Baraka) is the author of numerous books of poetry, fiction, and nonfiction. He was named Poet Laureate of New Jersey from 2002 to 2004 by the New Jersey Commission on Humanities. His most recent book, Tales of the Out & the Gone (Akashic Books, 2007), was a New York Times Editors' Choice and winner of a PEN/Beyond Margins Award. He lives in Newark, New Jersey.

LeRoi Jones (now known as Amiri Baraka) is the author of numerous books of poetry, fiction, and nonfiction. He was named Poet Laureate of New Jersey by the N.J. Commission on Humanities, from 2002-2004. His last two books of poetry, Somebody Blew Up America & Other Poems and Un Poco Low Coup received tremendous critical acclaim.