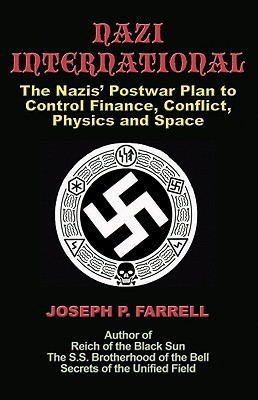 Physicist and Oxford educated historian Joseph P. Farrell continues his best-selling series of exposes on secret Nazi technology, Nazi survival, and post-war Nazi manipulation of various manufacturing technologies, economies and whole countries. Beginning with pre-War corporate partnerships in the USA, including the Bush family, he moves on to the surrender of Nazi Germany, and evacuation plans of the Germans. He then covers the vast, and still-little-known recreation of Nazi Germany in South America with help of Juan Peron, I.G. Farben and Martin Bormann. Farrell then covers Nazi Germany's Penetration of the Muslim World including Wilhelm Voss and Otto Skorzeny in Gamel Abdul Nasser's Egypt before moving onto the development and control of New Energy Technologies including the Bariloche Fusion Project, Dr. Philo Farnsworth's Plasmator, and the Work of Dr. Nikolai Kozyrev. Finally, Farrell discusses the Nazi desire to control space, and examines their connection with NASA, the esoteric meaning of NASA Mission Patches, plus final chapters on: Alchemy, Esotericism, The SS and the Unified Field Theory Craze; 1943-1945: Strange Events from the end of World War II and other Postwar Shenanigans. This book is literally packed with information.