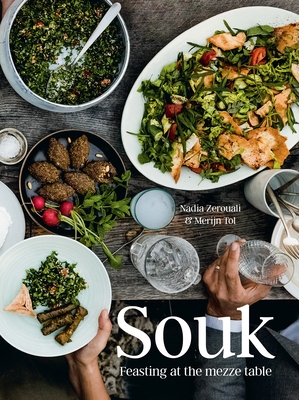 The souk, or marketplace, is the beating heart of Arabic cuisine and culture—this book celebrates the generosity of this rich food culture.

The word mezze stems from the Arabic term tamazzaza—a single word that broadly embraces the idea of enjoying small portions of food and taking the time to indulge one’s taste buds, eyes, and nose by exposing them to a wide range of aromas and flavors. A complete mezze table is formed when many of these warm and cold dishes are presented together, as a meal in itself.

The mezze culture originated in the Ottoman Empire and can be found in the whole of the Levantine Mediterranean: from Greece and Cyprus to Turkey, Palestine, Jordan, and Syria. But it is Lebanon, the cultural home of the authors, which has really developed and is famed for the richest, most extensive, and most sophisticated mezze culture.

In addition to the 100 classic and contemporary mezze recipes, Souk also delves into the personal stories and reminiscences about this food tradition and the families and friends the authors meet along the way. Eating mezze is a social event, wrapped in warmth and coziness, and spiced with waves of laughter and noisy chatter.

Authors Nadia Zerouali and Merijn Tol have been writing about Arabic and Mediterranean cookery for many years. They have traveled around southern Europe, the Maghreb, and the Middle East to experience the influence of Arabic cuisine for themselves, to taste the food, and to learn how to cook it authentically by joining local women in their own kitchens. They have previously authored Arabia and A Drop of Rose Water. They can also be seen on Dutch television (NTR), where they will present their own culinary travel program.

"It will feel impossible to make just one recipe from this book, and that's somewhat the point. The authors describe mezze culture beautifully as "a way of life" in this indispensable recipe source for anyone who loves Middle Eastern cuisine which begs to be brought to life as a market-inspired feast."
— Abby Reisner, TASTINGTABLE.COM

"It will feel impossible to make just one recipe from this book, and that's somewhat the point. The authors describe mezze culture beautifully as "a way of life" in this indispensable recipe source for anyone who loves Middle Eastern cuisine which begs to be brought to life as a market-inspired feast. Besides, if you don't have to make a choice between stuffed grape leaves, pomegranate-studded freekeh salad and red lentil kibbeh, then by all means, don't."
— EATYOURBOOKS.COM

"Homemade Middle Eastern food is diverse, simple, healthy and beautiful to behold on a table. Practice time-tested favorites and contemporary spins alike with culinary authorities and recipe developers Nadia Zerouali and Merijn Tol. Their latest book, Souk, brings these recipes to life with history, anecdotes and photos from their storied adventures in food. Once you learn to make moutabal, you’ll never look at an eggplant the same way."
— FOODREPUBLIC.COM