Chasing the Great Retreat: The German Cavalry Pursuit of the British Expeditionary Force Before the Battle of the Marne August 1914 (Paperback) 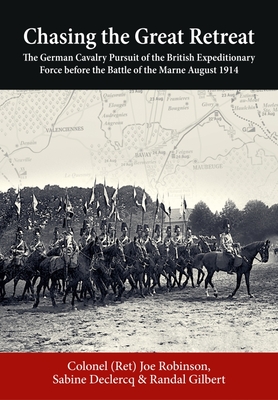 Written as a sequel to the award-winning German Failure in Belgium, August 1914: How Faulty Reconnaissance Exposed the Weakness of the Schlieffen Plan (2019), which won the Tomlinson Book Award for best First World War English language book in 2020, this volume stands alone as the German army chases the well-documented 'Great Retreat'. We focus on the German side of the retreat of the British Expeditionary Force (BEF). We show that the Great War should have ended on 23 August 1914 but, due to the 'fog and friction of war', as explained by General Carl von Clausewitz, it did not. So, 'Chasing the BEF' was born. This is an incredible story of missed opportunities made more astonishing by the amount of propaganda extolled by some British authors. This propaganda line generally purported the story that British firepower dealt a great blow to the German army at the Battle of Mons. Clearly in their eyes, the British won that battle. Much is told about the British soldiers' ability to fire 15 rounds of aimed shooting in a minute, which allegedly the Germans mistook for machine-gun fire. This is a myth that many readers grew up learning. Britain, in fact, lost the Battle of Mons and should have lost the war on 23 August. Germany missed a wide-open door that would have spelled disaster for the BEF and the entire Left Flank of the French army.

We focus on the role of the German cavalry. This arm is seriously understudied and has had little place in some official histories. In general, both British and German works ignore the role the cavalry played in the war. We are talking about the Right Wing of the German army only, consisting of the German First Army, Second Army and two cavalry formations known as H herer Kavallerie-Kommandeur (HKK 1 and HKK 2 ). The HKK were ad hoc organizations that had never been tested before the war. They are often wrongly referred to as a cavalry corps - the cavalry did not become a corps until 1915 - but neither were they similar to an infantry corps. However, many authors do not understand the concept of the HKK and therefore do not address the cavalry in operational maneuvers. This oversight is truly bizarre: The most mobile forces in warfare are given short shrift. Why?