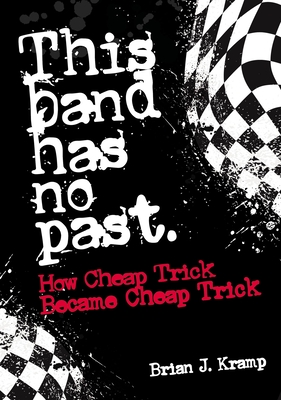 “This band has no past” was the first line of the farcical biography printed on the inner sleeve of Cheap Trick’s first album, but the band, of course, did have a past—a past that straddles two very different decades: from the tumult of the sixties to the anticlimax of the seventies, from the British Invasion to the record industry renaissance, with the band’s debut album arriving in 1977, the year vinyl sales peaked.

This Band Has No Past tells the story of a bar band from the Midwest—the best and weirdest bar band in the Midwest—and how these four baby boomers, having been lucky enough to avoid the Vietnam draft, doggedly pursued a most unlikely career in rock’n’roll and made it on their own terms. It traces every gnarly limb of the family tree of bands that culminated in Cheap Trick, then details how this unlikely foursome paid their dues—with interest—night after night, slogging it out everywhere from high schools to bars to bowling alleys to fans’ back yards, before signing to Epic Records and releasing two brilliant albums six months apart.

Drawing on more than eighty original interviews, This Band Has No Past is packed full of new insights and information that fans of the band will devour. How was the Cheap Trick logo created? How did the checkerboard pattern come to be associated with the band? When did Rick Nielsen start wearing a ballcap 24/7? Who caught their mom and dad rolling on the couch? Read on and find out.

Brian J. Kramp grew up in Waukesha and attended the University of Wisconsin in Madison—two cities that played very prominent roles in the history of Cheap Trick. A keen rock fan, Brian has been collecting records for more than thirty years and is the co-host, alongside Ken Mills, of Cheap Talk, a podcast devoted to Cheap Trick, and host of Rock and/or Roll, part of the Pantheon Network.