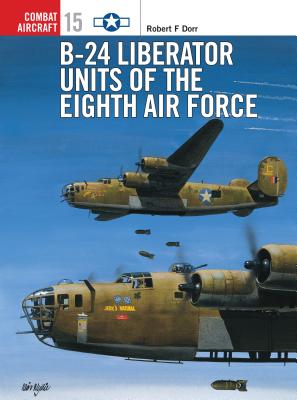 This is book number 15 in the Combat Aircraft series.

Osprey's examination of the B-24 Liberator Units' participation in World War II (1939-1945). The B-24 Liberator was built in greater numbers than any other US warplane, yet its combat crews live, even today, in the shadow of the less plentiful, but better-known, B-17. Accounts of the 'Mighty Eighth' in Europe, and indeed many of the books and films that emerged from the greatest air campaign in history, often overlook the B-24, even though it was in action for as long as the Flying Fortress, and participated in just as many perilous daylight bombing missions.

Robert F Dorr is a well respected author of long-standing reputation - he has written over a dozen books for Osprey over the years. His histories on modern American combat aircraft like the F-101 Voodoo and A-6 Intruder have set the standard for works of this type. His ability to combine 'crew speak' with concise editorial comment gives his books a unique and revealing style of their own.