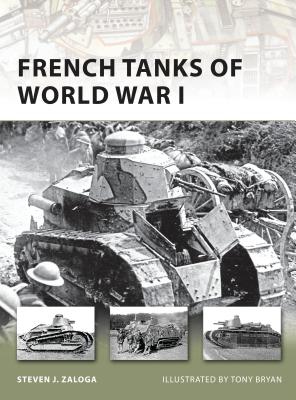 This is book number 173 in the New Vanguard series.

This title examines the emergence of the first modern tank, the Renault FT. It is a little known fact that France fielded more tanks in World War I than any other army. However, France's early tanks suffered from poor mobility and armor compared to their contemporaries. Indeed, their initial use on the Chemin des Dames in 1917 was a bloody fiasco. In spite of initial set-backs, the French army redeemed its reputation with the Renault FT.

The Renault FT pioneered the modern tank design, with armament in a revolutionary central turret and the engine in the rear. More importantly, the Renault was designed to be cheap and easy to manufacture. Discover the history of the early French armor developments and their triumphant new design, the Renault FT, that helped to turn the tide of war in the favor of the Allies.

“This book is definite read for anyone who wants to learn just about everything there is to know in a concise format about the French Tanks of WWI. Tank enthusiasts, modelers performing research or history buffs will find this book very interesting.” —www.mataka.org (January 2011)

“An excellent look at early tanks and tank warfare. It makes for a book that is an absolute must for any armor enthusiast.” —Scott Van Aken, Modeling Madness

“...an excellent survey that offers insights on the design, construction and history of early French armor developments.” —The Midwest Book Review