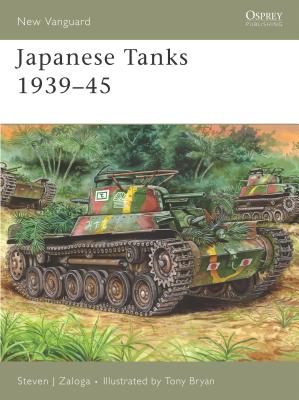 This is book number 137 in the New Vanguard series.

Contrary to popular belief, the Japanese Army widely employed tanks within the Pacific theater of war. This title details their key role in the conquests of Singapore and Malaya, as well as their later use in Burma, Saipan, and the Philippines, including in the amphibious assault of Corregidor. Tank development succeeded against the odds, with the programme often neglected to pursue the higher priority of warship development. Their use in the most difficult of terrain is a testament to their ingenuity.

Steven J Zaloga's book offers a rare insight into a largely overlooked subject and is rich with photographs and artwork, providing a wonderful resource for the construction and design of these fascinating tanks.

Peter Bull has worked as a freelance illustrator for more than twenty-five years. He illustrated Claire Llewellyn's Explorers: Big Cats, among other books. He creates both traditional and digital art for publishers worldwide and also runs the Peter Bull Art Studio, based in the United Kingdom.

“The content is, as you would expect from Steven Zaloga, well written and easy to follow...Useful single-volume summary with colour notes and plates. Wide range of photographic coverage. Best viewed as a single-volume primer and source for further reading in-depth. Worthwhile colour illustrations.” —David Maynard, Armorama (February 2008)

“Japanese tanks are much maligned as under-protected and under-gunned. While this may be true after early 1942, Japanese tank technology was actually in the forefront in the 1930s ... This book has separate sections on six different tanks with photos of each vehicle ... A separate chapter discusses WWII development and deployment of tanks and the final chapter has several different sections detailing Japanese armor use in eight different theaters of the Pacific War ... This is a great book ... [and] a must for anyone interested in the Pacific War.” —Michael Koznarsky, Historical Miniature Gamer (Issue 11)

“Author Steven J. Zaloga is widely acknowledged as one of the foremost authorities on armor and has put his expertise to use in this book. Each type of tank is detailed along with modifications and variants... it is a book that I can most higholy recommend to the enthusiast and modeler alike.” —Scott Van Aken, modelingmadness.com (August 2007)