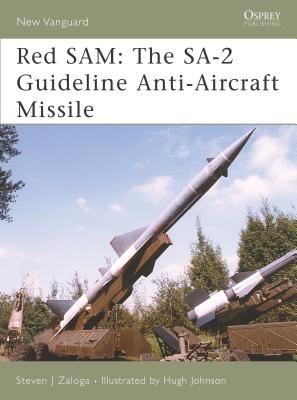 This is book number 134 in the New Vanguard series.

The SA-2, nicknamed Red SAM, is the most widely used air defense missile in history, most famous for nearly sparking a nuclear exchange between the USSR and America when one brought down a U-2 spy plane in 1960. Deployed widely against American aircraft in Vietnam the SA-2 has seen service in North Korea, Egypt, and various world conflicts including the 2003 Gulf War and remains in service today despite its aging 50-year-old technology.

Using rare interviews and accounts from the Russian designers of the weapon, and supported by photographs and color artwork, Steven J Zaloga examines the development of the SA-2, linking the technical history of the weapon to its massive impact on air campaigns during the Cold War, and investigates the design changes, which helped the SA-2 stand the test of time.

Jim Laurier is a native of New England and lives in New Hampshire. He attended Paier School of Art in Hamden, Connecticut, from 1974–78, and since graduating with Honours, he has been working professionally in the field of Fine Art and Illustration. He has been commissioned to paint for the US Air Force and has aviation paintings on permanent display at the Pentagon.

“Praise for the New Vanguard Series: Overall, these books are a good source of the 'what' and 'why' . . . a good overall reference source, and the photos . . . are all excellent, as clear as possible, and support the text.'” —Hyperscale