Waterloo: The Campaign of 1815: Volume II - From Waterloo to the Restoration of Peace in Europe (Hardcover) 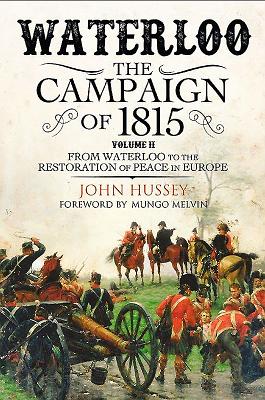 The concluding volume of this work provides a fresh description of the climatic battle of Waterloo placed in the context of the whole campaign. It discusses several vexed questions: Bl cher's intentions for the battle, Wellington's choice of site, his reasons for placing substantial forces at Hal, the placement of Napoleon's artillery, who authorized the French cavalry attacks, Grouchy's role on 18 and 19 June, Napoleon's own statements on the Garde's formation in the final attack, and the climactic moment when the Prussians reached Wellington's troops near la Belle Alliance.

Close attention is paid to the negotiations that led to the capitulation of Paris, and subsequent French claims. The allegations of Las Cases and later historians that Napoleon's surrender to Captain Maitland of the Bellerophon amounted to entrapment are also examined.

After a survey of the peace settlement of 1815, the book concludes with a masterly chapter reviewing the whole story of the 1815 campaign.