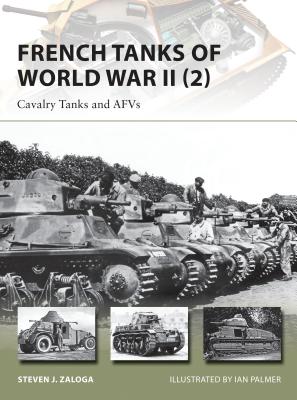 This is book number 213 in the New Vanguard series.

The design quality of France's armored vehicles is somewhat forgotten in light of the myth of superiority surrounding the German Panzers' role in the Blitzkrieg against France, Belgium and the Netherlands.

The second volume of two covering the French tanks of World War II, this title focuses primarily on the design, development, combat performance, and technical features of France's armored cavalry vehicles, including the AMR and AMC families of light reconnaissance tanks, and the famous Somua S.35 cavalry tank. Also examined are the wide array of armored cars and half-tracks employed by the French Cavalry, and the extensively produced Hotchkiss H-35/H-39 series that was designed for the Cavalry but also saw widespread use by the Infantry. This volume also looks at the specialized armored vehicles used by the French military, including the Chenillette US, Lorraine, and the various tank destroyer types brought hastily into service in 1940.

Ian Palmer is a highly experienced digital artist with two decades of experience in the video games industry, both as a 3D artist and an Art Director. He has a passion for military history, gaming and riding his motorbike. He lives in Warwickshire with his wife, daughter and menagerie of pets.

“This is a very good book. As a reference for history buffs it hits the mark for providing an amazing amount of information.” —www.amps-armor.org (August 2014)

“This book covers the early initiatives into mechanized cavalry as well as the various tanks used. This includes various Renault tanks, the Souma S 35, the Hotchkiss H 35 and H39 as well as the Panhard AMD 35. A goodly portion of the book covers the performance of French units during the 1940 invasion and is followed by French use of armored tanks after the 1940 Armistice that includes use in the Levant and Indo-China. It also covers use during the Allied invasion in November 1942. All of this is accompanied by superb period photos and the excellent art work of Ian Palmer. In all, it makes for a great primer on French cavalry tanks and AFVs. A book that I very much enjoyed reading and from which I learned a lot. Highly recommended.” —Scott van Aken, www.modelingmadness.com (July 2014)