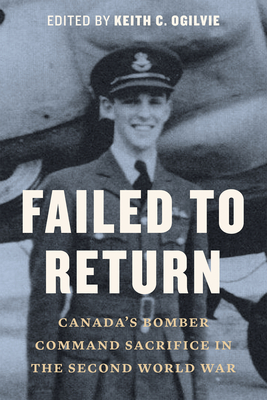 A compelling look at sixteen stories of Canadians killed and missing in the line of duty while serving in the Royal Air Force Bomber Command, one of the most dangerous assignments in the Second World War.

Royal Air Force Bomber Command was one of the most dangerous divisions for Allies serving in the Second World War. Despite the risks, the opportunity to fly was seen as exciting and glamorous, attracting a steady stream of young volunteers. Of the some 125,000 aircrew who served in Bomber Command, 45% were killed in action. Nearly 10,000 Canadians were among those who perished.

Failed to Return tells sixteen stories of Canadian flyers who made the ultimate sacrifice for their country. Many of the stories in this book are heroic, like those of two Canadian participants in the famous Dambusters raid, or brave, like those captured as prisoners of war, while others are simply tragic, describing staggering losses where entire aircrafts and crew disappeared without a trace. At its core, Failed to Return presents these individual accounts as an illumination of, and memorial to, the unique lives that lay behind the dreadful statistics.