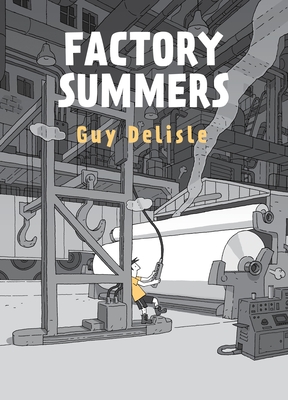 For three summers beginning when he was 16, cartoonist Guy Delisle worked at a pulp and paper factory in Quebec City. Factory Summers chronicles the daily rhythms of life in the mill, and the twelve hour shifts he spent in a hot, noisy building filled with arcane machinery. Delisle takes his noted outsider perspective and applies it domestically, this time as a boy amongst men through the universal rite of passage of the summer job. Even as a teenager, Delisle’s keen eye for hypocrisy highlights the tensions of class and the rampant sexism an all-male workplace permits.

Guy works the floor doing physically strenuous tasks. He is one of the few young people on site, and furthermore gets the job through his father’s connections, a fact which rightfully earns him disdain from the lifers. Guy’s dad spends his whole career in the white collar offices, working 9 to 5 instead of the rigorous 12-hour shifts of the unionized labor. Guy and his dad aren’t close, and Factory Summers leaves Delisle reconciling whether the job led to his dad’s aloofness and unhappiness.

On his days off, Guy finds refuge in art, a world far beyond the factory floor. Delisle shows himself rediscovering comics at the public library, and preparing for animation school–only to be told on the first day, “There are no jobs in animation.” Eager to pursue a job he enjoys, Guy throws caution to the wind.

Born in Québec City, Canada, in 1966, Guy Delisle now lives in the South of France with his wife and two children. Delisle spent ten years working in animation and is best known for his travelogues about life in faraway countries. He is the author of numerous graphic novels and travelogues, including Hostage, Jerusalem: Chronicles from the Holy City and Pyongyang: A Journey in North Korea. In 2012, Guy Delisle was awarded the Prize for Best Album for the French edition of Jerusalem at the Angoulême International Comics Festival.

One of Publishers Weekly’s Most Anticipated Books of Spring 2021!

"One of the greatest modern cartoonists."—The Guardian

"This intimate book feels near mythic by the end: a real artist of paper emerging from the place where paper is made."—New York Times Best Graphic Novels of 2021

"[Delisle's] textured drawings capture the characters with insight and gentle humor, as well as terrifying close calls with dangerous machinery. [He] pinpoints the lesson learned those summers: 'You can see the benefit of staying in school.' This should please Delisle’s loyal fans with its peek into his young adulthood."—Publishers Weekly

"A carefully observed portrait of a time and place, as well as a deeply personal coming-of-age tale. Not to be missed."—Tom Batten, Library Journal, Starred Review

"Factory Summers is the key to Delisle’s nonfiction oeuvre: It shows his growing curiosity, in those formative years, both about how things function structurally and about people—and how he learned to listen to them. Its light touch makes a big impact."—Hillary Chute, New York Times

"The legendary Québécois illustrator revisits the summers he spent as a teenager working at a pulp-and-paper plant. The book details the quiet (and not-so-quiet) desperation of his older co-workers, while conjuring up the fugitive pleasures of those times now long past. Its portrait of his distant father, an executive at the plant, is at once sweet and bitter."—The Globe and Mail, Best Books of 2021

"Wry, illuminating... Delisle's endlessly droll observations result in a captivating, beguiling self-portrait of an artist-in-the-making as a hardworking teen."—Shelf Awareness

"In this black-and-white coming-of-age graphic memoir, Delisle... recalls with poignancy and humour the class tensions that permeated the summers he spent working, starting at age 16, on the floor of the Quebec City pulp mill where his father was manager for 30 years."—The Globe and Mail

"With smart use of a limited color palate, Factory Summers provides a personal history right alongside important lessons on work, climate, how we learn to navigate the world as a young adult, and, in the end, on the nature of family."—Booklist

"Factory Summers evokes all the formative memories associated with that first summer job—the eclectic coworkers, the long hours and the bittersweetness of clocking out for the last time."—Maisonneuve

"In his subtle, matter-of-fact way, Delisle has shown us that art and story can be an escape, for him and for us, not just as a temporary means of withdrawal from reality but as a means of survival."—The Comics Journal