Bumbling Through the Hindu Kush: A Memoir of Fear and Kindness in Afghanistan (Paperback) 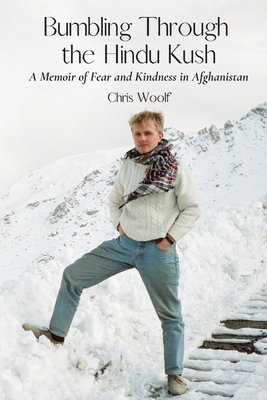 What happens when a regular person accidentally finds themselves lost in the middle of a war?

In 1991, BBC journalist Chris Woolf travelled to Afghanistan. The government in Kabul was fighting for survival, after the withdrawal of the Soviet Union. The parallels to today are extraordinary.

Woolf was visiting a colleague to see if he'd like the life of a foreign correspondent. They hitched a ride with an aid convoy and bumbled straight into the war. They kept going, despite the horror and terror. There was no choice.

Amid the darkness, Woolf discovered the generosity and hospitality of ordinary Afghans.

They became the first journalists to pass through the battle lines to meet with legendary warlord Ahmed Shah Massoud, and carried home a vital message for the peace process. They met with Soviet POW/MIAs and recorded messages for loved ones.

Unlike a conventional war story, Woolf shares an intimate portrait of first encounters with death and real fear. He explores the lingering effects of trauma, and explains how he put his experience to good use.

The author introduces readers to just enough of Afghanistan's history, geography, culture and politics for readers to understand what's going on around him.

What people are saying:

"Bumbling Through the Hindu Kush is at once gripping, informative, suspenseful, and at times it reads like a thriller."

"Chris Woolf has written a truly personal tale that is both gripping and historically significant for the war between the Soviet-backed government and Mujahidin in Afghanistan. His mix of personal, cultural, and wartime reflections make this a story well worth the time of Afghanistan aficionados and casual readers alike."

- Dr Jonathan Schroden, former strategic adviser to the US military's Central Command, and to the International Security Assistance Force (ISAF) in Afghanistan

"Combat can feel like the ant on an elephant's tail: overwhelmed and along for the ride. Chris Woolf's memoir of his ten days in late 1991 "bumbling" into the war in Afghanistan is just such an up-and-down tale, with the momentary highs and gut-crushing lows common to combat. When the teenage goat herder fires his AK-47 in the first few pages - you'll know how that ant feels, just holding on, exhilarated, terrified, never really knowing what comes next."

The perfect Christmas gift for all those who like military history and think they understand war.

The author believes in giving back, so a portion of the proceeds is donated towards helping Afghan kids with disabilities (enabledchildren.org), and towards clearing landmines in Afghanistan and around the world (HALOTrust.org).