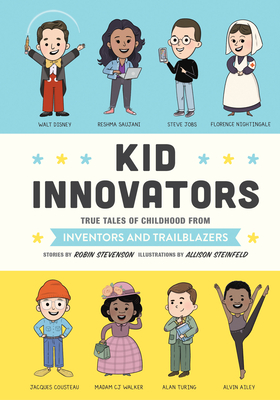 This is book number 7 in the Kid Legends series.

Throughout history people have experimented, invented, and created new ways of doing things. Kid Innovators tells the stories of a diverse group of brilliant thinkers in fields like technology, education, business, science, art, and entertainment, reminding us that every innovator started out as a kid. Florence Nightingale rescued baby mice. Alan Turing was a daydreamer with terrible handwriting. And Alvin Ailey felt like a failure at sports.

Robin Stevenson is an award-winning author of thirty books for kids and teens. Her writing has been translated into a number of languages and published in more than a dozen countries. She lives with her family on the west coast of Canada.

Allison Steinfeld obtained a BFA from the School of Visual Arts in New York City. She loves to create fun and playful work that can be enjoyed by readers of all ages. She lives in Atlanta, Georgia.

“Telling the true stories of famous people’s childhoods, this book inspires kids to think big and humanizes historical figures in a new and fresh way.”—CNN Underscored

“These reads aren’t just educational, they’re inspiring – they remind us all that we’re never too young to start dreaming! Plus – they’re a great resource for school projects!”—YAYOMG.com

“In accessible but never patronizing prose, Stevenson sketches the stories of her subjects’ childhoods, deftly setting the scene for each one and providing informative details, engaging quotes, and sometimes humorous anecdotes.”—Mombian

Praise for the Kid Legends series:
“Engaging and empowering.”—YAYOMG.com, on Kid Activists by Robin Stevenson

“Kids will be drawn in.”—Chicago Parent, on Kid Activists by Robin Stevenson

“The vivid details of each activist's story, combined with vibrant illustrations, demonstrate that every civil rights hero and popular firebrand started out as children, just like the rest of us.”—School Library Journal, on Kid Activists by Robin Stevenson

“A great way to encourage kids who already love science to pursue their interests as well as to show kids who are not motivated by traditional schooling that there are many paths to greatness.”—American Scientist Magazine, on Kid Scientists by David Stabler

“For your budding astrophysicist, inventor, doctor, environmentalist, or mathematician, Kid Scientists will open her eyes with mini-bios of interesting and accomplished people.”— Terri Schlichenmeyer, The Bookworm Sez, on Kid Scientists by David Stabler

“A heartening reminder that 17 unconventional greats—not to mention all the rest—started out as children too.”—Kirkus Reviews, on Kid Artists by David Stabler

“Just like history class, only hilarious.”—Tim Federle, author of Better Nate Than Ever, on Kid Presidents by David Stabler

“Full of real information, but the author made it fun and funny.”—Michael, age 9, on Kid Authors by David Stabler