The Provisions of War: Expanding the Boundaries of Food and Conflict, 1840-1990 (Food and Foodways) (Paperback) 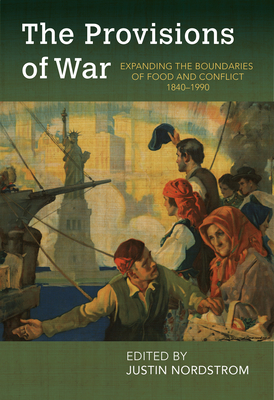 The Provisions of War examines how soldiers, civilians, communities, and institutions have used food and its absence as both a destructive weapon and a unifying force in establishing governmental control and cultural cohesion during times of conflict. Historians as well as scholars of literature, regional studies, and religious studies problematize traditional geographic boundaries and periodization in this essay collection, analyzing various conflicts of the nineteenth and twentieth centuries through a foodways lens to reveal new insights about the parameters of armed interactions.

The subjects covered are as varied and inclusive as the perspectives offered—ranging from topics like military logistics and animal disease in colonial Africa, Indian vegetarian identity, and food in the counterinsurgency of the Malayan Emergency, to investigations of hunger in Egypt after World War I and American soldiers’ role in the making of US–Mexico borderlands. Taken together, the essays here demonstrate the role of food in shaping prewar political debates and postwar realities, revealing how dietary adjustments brought on by military campaigns reshape national and individual foodways and identities long after the cessation of hostilities

Justin Nordstrom is professor of history at Penn State’s Hazleton campus. He is the author of Danger on the Doorstep: Anti-Catholicism and American Print Culture in the Progressive Era and the editor of Aunt Sammy’s Radio Recipes: The Original 1927 Cookbook and Housekeeper’s Chat.

“Interesting, informative, and well-researched, these essays expand the boundaries of traditional military history, on both the battlefield and the home front, through this focus on food.”
—Amy Bentley, author of Eating for Victory: Food Rationing and the Politics of Domesticity

“This valuable volume highlights the connections between food and military history and makes a compelling case for rethinking the breadth of topics that should be considered in relation to war.”
—Kellen Backer, Syracuse University