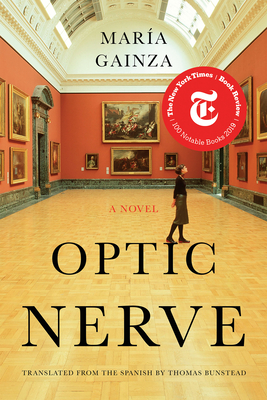 "In this delightful autofiction―the first book by Gainza, an Argentine art critic, to appear in English―a woman delivers pithy assessments of world–class painters along with glimpses of her life, braiding the two into an illuminating whole." ―The New York Times Book Review, Notable Book of the Year and Editors' Choice

The narrator of Optic Nerve is an Argentinian woman whose obsession is art. The story of her life is the story of the paintings, and painters, who matter to her. Her intimate, digressive voice guides us through a gallery of moments that have touched her.

In these pages, El Greco visits the Sistine Chapel and is appalled by Michelangelo’s bodies. The mystery of Rothko’s refusal to finish murals for the Seagram Building in New York is blended with the story of a hospital in which a prostitute walks the halls while the narrator’s husband receives chemotherapy. Alfred de Dreux visits Géricault’s workshop; Gustave Courbet’s devilish seascapes incite viewers “to have sex, or to eat an apple”; Picasso organizes a cruel banquet in Rousseau’s honor . . . All of these fascinating episodes in art history interact with the narrator’s life in Buenos Aires―her family and work; her loves and losses; her infatuations and disappointments. The effect is of a character refracted by environment, composed by the canvases she studies.

Seductive and capricious, Optic Nerve marks the English–language debut of a major Argentinian writer. It is a book that captures, like no other, the mysterious connections between a work of art and the person who perceives it.

María Gainza was born in Buenos Aires, where she still resides. She has worked as a correspondent for The New York Times in Argentina, as well as for ARTnews. She has also been a contributor to Artforum, The Buenos Aires Review, and Radar, the cultural supplement from Argentine newspaper Página/12. She is coeditor of the collection Los Sentidos (The Senses) on Argentinean art, and in 2011 she published Textos elegidos (Selected Texts), a collection of her notes and essays on contemporary art. Optic Nerve is her first work of fiction and her first book to be translated into English.

Thomas Bunstead is a writer and translator based in East Sussex, England. He has translated some of the leading Spanish–language writers working today, including Eduardo Halfon, Yuri Herrera, Agustín Fernández Mallo, and Enrique Vila–Matas, and his own writing has appeared in publications such as Kill Author, The White Review, and The Times Literary Supplement. He is an editor at the translation journal In Other Words.

Praise for Optic Nerve
Finalist for the 2020 Los Angeles Times Art Seidenbaum Award for First Fiction
The New York Times Book Review, 1 of the 100 Notable Books of the Year
Publishers Weekly, One of the Top Ten Books of the Year

“In this delightful autofiction—the first book by Gainza, an Argentine art critic, to appear in English—a woman delivers pithy assessments of world–class painters along with glimpses of her life, braiding the two into an illuminating whole.” —The New York Times Book Review, Editors’ Choice

“Appealing and digressive . . . María’s store of information about painters and their lives can make reading the book feel, delightfully, like auditing a course . . . Consistently charms with its tight swirl of art history, personal reminiscence and aesthetic theories.” —John Williams, The New York Times Book Review

“A roving, impassioned hybrid of art history and memoir . . . The pithy biographical portions of Optic Nerve are bracing correctives to potted textbook histories . . . Treat the chapters like stand–alone essays, each one enlivened by the delightful variety and idiosyncrasy of artistic obsession.” —Sam Sacks, The Wall Street Journal

Startlingly original . . . Both Gainza’s writing style and her taste in art display a preference for understatement . . . One senses a certain arbitrariness, a sincerity of taste that brings to mind Borges’s literary enthusiasms . . . Rare and exquisite.” —Maxine Swann, Los Angeles Review of Books

“Gainza’s narrator is an Argentinian woman with a great interest in art and she weaves in and out of anecdotes from her own life, information about artists, and engagement with the art itself. Its discursiveness is its greatest strength; the smooth movement from one subject to the other is engaging and satisfying. Gainza also has an ability to wrestle with the contradictions and small lies that operating in the Art world, so to speak, produces.” —Bradley Babendir, Chicago Review of Books

“Here, art is a trellis around which life knots and overlaps, severs, climbs upward . . . Optic Nerve’s episodic iridescence—the way each chapter shimmers with the delicacy of a soap bubble—belies its gravity. Gainza has written an intricate, obsessive, recherché novel about the chasm that opens up between what we see and what we understand . . . a radiant debut.” —Dustin Illingworth, The Nation

“Gainza’s long–awaited English–language debut is a provocative novel that investigates the power, value, and emotional significance that art carries, from the perspective of one deeply curious Argentinian woman.” —David Canfield, Entertainment Weekly

“Optic Nerve would be worth reading as an art history lesson alone; its descriptions of great paintings are phenomenal, as are its lives–of–the–artists anecdotes . . . With each chapter, María finds a new artist to love, and, in doing so, accesses a new part of herself. It's a pleasure to watch her do both.” —Lily Meyer, NPR

“Is there anything more exciting than when art defies categorization, resists genre, operates only within the boundaries of its creator’s intentions? María Gainza's Optic Nerve is one such piece of art; its words shimmer and shimmy inside your head as it leads you to places you’ve never been, and could only ever have imagined. Part autofiction and part inquiry into the consumption of art, Optic Nerve is a vital read for anyone who knows that seeing something isn't the same thing as perceiving it, and that once you understand the distinction between the two, entirely new worlds can open up, unconstrained from the restrictions too often placed upon them.” —Kristin Iversen, NYLON