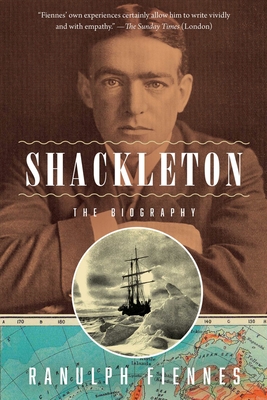 By Ranulph Fiennes
Not available.

“When Ranulph Fiennes produces a book about Ernest Shackleton, it should get our attention. I found that the best way to read this book is to imagine that you are in a pub sharing a beer with Sir Ranulph while he regales you with his tale about Ernest Shackleton. Fiennes moves the narrative along at a good pace and his storytelling becomes particularly animated when he is describing the actual grind of slogging through the snow and ice.”—Lloyd Spencer Davis, The New York Times Book Review (front page review)

To write about Hell, it helps if you have been there.

In 1915, Sir Ernest Shackleton's attempt to traverse the Antarctic was cut short when his ship, Endurance, became trapped in ice.

The disaster left Shackleton and his men alone at the frozen South Pole, fighting for their lives. Their survival and escape is the most famous adventure in history.

Shackleton is a captivating new account of the adventurer, his life and his incredible leadership under the most extreme of circumstances. Written by polar adventurer Sir Ranulph Fiennes who followed in Shackleton's footsteps, he brings his own unique insights to bear on these infamous expeditions. Shackleton is both re-appraisal and a valediction, separating Shackleton from the myth he has become.

Ranulph Fiennes is the only man alive ever to have traveled around the Earth’s circumpolar surface—and his Arctic and Antarctic expeditions give him a unique perspective on the life of Shackleton. His record-breaking expeditions include travel by riverboat, hovercraft, man-haul sledge, skidoo, Land Rover, and skis. When not on one of his adventures, he lives in Britain.

“Fiennes brings the promised perspective of one who has been there, illuminating Shackleton’s actions by comparing them with his own. Beginners to the Heroic Age will enjoy this volume, as will serious polar adventurers seeking advice. For all readers, it’s a tremendous story.”
— Sara Wheeler

"Think of Fiennes, rather, as an Edwardian raconteur with veiny cheeks and a plummy growl who pours you a dram and pulls you close to the fire…He concedes that Shackleton was bad at business, bad at planning, bad at domestic life, and all too adept at taking risks. He acknowledges that Shackleton never once 'reached his intended main goal.' But he endorses the conclusion of the polar explorer Sir Raymond Priestley: 'When you are in a hopeless situation, when there seems to be no way out, get on your knees and pray for Shackleton.'
— Air Mail

"A world-renowned explorer and prolific writer turns his attention to Ernest Shackleton, a giant of the heroic age of polar exploration, with entirely satisfying results….The definitive biography of a legendary adventurer."
— Kirkus, Starred Review

"Fiennes’ own experiences certainly allow him to write vividly and with empathy of the hell that these men went through.”
— The Sunday Times (London)

"Full of awe-inspiring details of hardship, resolve and weather that defies belief, told by someone of unique authority. No one is more tailor-made to tell [this] story than Sir Ranulph Fiennes.”
— Newsy

"A valuable corrective. One by one, and with commendable attention to detail, Fiennes explodes the accumulated myths."
— The Sunday Telegraph

"Stirring. No one is better placed than Fiennes to understand or appreciate the enormity of this achievement.”
— The Daily Mail

“There can be few stories in the annals of exploration so firmly entrenched in the public imagination as Sir Ernest Shackleton’s. Highly readable and compelling.  Fiennes is the only one of Shackleton’s biographers to have experienced firsthand anything like the extremes Shackleton and his men endured.  He sparks it to life in a way no other biographer could. Brilliant”
— The Explorers Journal