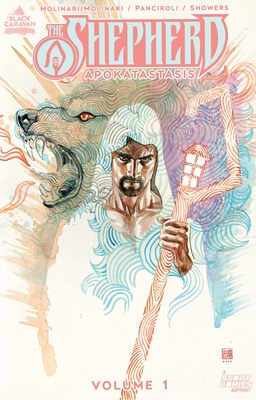 Prof. Lawrence Miller falls into a dark vortex of guilt and anger after enduring the tragic death of his teenage son. He cannot shake the sense that his son is now a lost soul, wandering between heaven and earth. Grieving and profoundly disturbed, he pursues his son into the afterlife.

Once on the other side, he encounters his deceased father and is given a mystical pendant of great power. Unfortunately, in Lawrence’s hands it becomes a weapon that allows him to unleash his fury on those who caused his son’s death, leaving a trail of insanity and chaos in his wake. His existence becomes a terrifying conflict between his unchecked anger and his dawning understanding that he has lost his way.

Andrea Lorenzo Molinari, Ph.D. is co-writer/ co-creator of The Shepherd, OGN series with Scout Comics. Molinari serves as editorial director for Scout Comics, and works with many creative teams from around the world. He has worked as both submissions editor and project editor for Caliber Comics, as a staff editor for the Spanish publisher, Amigo Comics (Málaga, Spain), and has edited books for Action Lab Entertainment, Behemoth, and the Canadian publisher Chapterhouse.

Roberto Xavier-Valentin Molinari is co-writer/ co-creator of The Shepherd graphic novel series, originally with Caliber Comics but now with Scout Comics’ horror imprint Black Caravan. In addition, he is working on a trilogy of illustrated fantasy novels with fine artist Jess Hara. When he is not forging new worlds, he pursues his interests in artisanal baking, cooking, and fitness.

Luca Panciroli (pencils/inks for The Egyptian Story) Born in Florence in 1968, he made his debut in the world of comics in 1994, with the miniseries Erinni, written by Ade Capone. The miniseries still holds the record for comic store sales as an indie comic. After this experience, he retired from the world of comics and stopped drawing for 17 years. He started again in 2015, with the series The Noise by Pietro Gandolfi and also with Gandolfi he realized the series The Fiend. In 2018, the graphic novel Winterdeath written by Alessio Landi came out. Following that, he Volume 1 of the Dark Frontier miniseries with Massimo Rosi. Together with Rosi and Landi, he recently created two volumes of The Barbarian King, for which he also did character design. At the moment, he is busy making The Shepherd: The Burning Maid.

Ryan Showers (pencils/ inks for the main story) – Showers is a young artist.  Despite his youth, he has been responsible for the pencils and inks in Shamantra #1 (self-published); Forgotten Tales #1 and Kreepy Kofy Movie Time #1 both published by Scattered Comics of Sacramento, CA.  Ryan has also done artwork for several bands in his local area (Omaha, NE) and stays busy with commission work on the side.