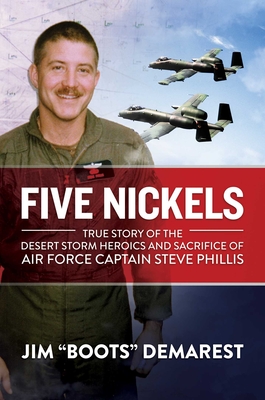 Five Nickels is the true story of Captain Steve Phillis, a decorated Air Force A-10 fighter pilot killed under heroic circumstances while trying to save his downed wingman on their thirtieth Desert Storm combat mission.

On February 15, 1991, Captain Steve Phillis was leading his wingman, Lieutenant Rob Sweet, on their thirtieth combat mission of Desert Storm flying the A-10 Warthog. They were tasked with attacking Iraq’s vaunted Medina Division of the Republican Guards—by far their most dangerous mission of the war.

Near the end of their attacks, Rob was forced to eject from his aircraft and began a five-minute parachute ride down to the troops he and Steve had just finished bombing. Steve, an experienced combat search and rescue pilot and distinguished graduate of the Air Force Fighter Weapons School, immediately sprang into action to save the life of his wingman. After spending three minutes and forty-five seconds circling Sweet, Steve’s A-10 was hit by an enemy surface-to-air missile.

Five Nickels: True Story of the Desert Storm Heroics and Sacrifice of Air Force Captain Steve Phillis, is a love story. Steve loved his family, fiancée, fellow fighter pilots, country, wingman, and life. Yet he was willing to risk them all to fight—and if necessary, die—for what he believed in. Steve’s story—from Rock Island, Illinois to the Air Force Academy, to his life as an A-10 fighter pilot—is the stuff of heroes.

As Steve’s Academy classmate and boxing partner, fellow fighter pilot and “Top Gun” graduate, Jim “Boots” Demarest is uniquely qualified to tell Steve’s story. A gifted storyteller, Boots shares his experience with Steve from the Academy Boxing Team to paint a complete picture of the man who had so much to live for, yet was willing to risk it all to do the right thing. Five Nickels is filled with the details of Steve’s life and loves that will capture, enchant, and pull readers in. His story of combat heroics in the face of incredible danger will captivate and inspire all who read it.

Brigadier General Jim “Boots” Demarest is an author and speaker uniquely qualified to tell the story of Captain Steve Phillis. They graduated together from the Air Force Academy, after which Jim spent ten years as an F-15 fighter pilot. He was a distinguished graduate of the Fighter Weapons School “Top Gun” program, and served in Desert Storm.

Following a break in service to attend Cornell Law School and work as an attorney and professional speaker, Boots returned to military service in the Florida Air National Guard as a JAG. General Demarest was promoted into a leadership position as Chief of Staff and Deputy Commanding General, and is a sought-after speaker on topics including leadership and execution improvement.