Orphans of the Storm (Hardcover) 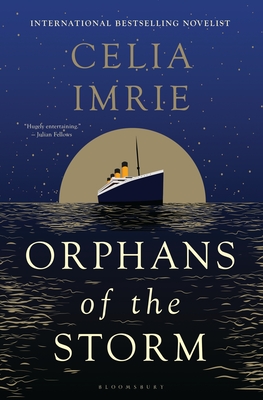 From internationally bestselling author and celebrated actress Celia Imrie, an epic novel set against the backdrop of the sinking of the Titanic.

Nice, France, 1911: After three years of marriage, Marcella Navratil has finally had enough. Her husband, Michael, an ambitious tailor, may have charmed her during their courtship, but their few years of marriage have revealed a cruel and controlling streak. The 21-year-old mother of two is determined to get a divorce.

But while awaiting the Judges' decision on the custody of their children, Michael receives news that changes everything.

Meanwhile fun-loving New York socialite Margaret Hays is touring Europe with some friends. Restless, she resolves to head home aboard the most celebrated steamer in the world.

But as the ship sets sail for America, carrying two infants bearing false names, the paths of Marcella, Michael and Margaret cross and nothing will ever be the same again.

Orphans of the Storm dives into the waters of the past to unearth a sweeping, epic tale of the sinking of the Titanic that radiates with humanity and hums with life.

Celia Imrie is an Olivier award-winning and Screen Actors Guild-nominated actress. She is known for her film roles in The Best Exotic Marigold Hotel, The Second Best Exotic Marigold Hotel, Calendar Girls and Nanny McPhee. Celia Imrie has recently starred in the major films Bridget Jones's Baby, Absolutely Fabulous: The Movie, Year by the Sea and A Cure for Wellness. In 2016 she also appeared in FX's new comedy series Better Things, and returned to the stage in King Lear at The Old Vic. 2017 so far has seen Celia Imrie appear in psychological horror A Cure For Wellness. Celia Imrie is the author of an autobiography, The Happy Hoofer, and two top ten Sunday Times bestselling novels, Not Quite Nice and Nice Work (If You Can Get It).

“The fate of the Titanic is well-known, but Imrie's meticulously researched and well-plotted historical novel takes a closer look at the lives of the two young boys rescued from the wreckage ... Fans of Lynda Rutledge, Christina Clancy, and Melissa Payne will be enthralled as Imrie follows a family on the brink of disaster.” —Booklist

“… the writing flows and readers will be swept away.” —Library Journal

“A very witty novel by a very witty woman. Hugely entertaining” —Julian Fellowes, creator of Downton Abbey, on NOT QUITE NICE

“A warm, light-hearted, fast-paced tale.” —Joanne Harris, author of CHOCOLAT, on NOT QUITE NICE

“Anything written by Celia Imrie is guaranteed to put a smile on our faces.” —Good Housekeeping on SAIL AWAY