Putin's Trolls: On the Frontlines of Russia's Information War Against the World (Paperback) 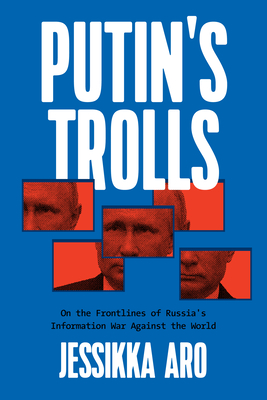 "Timely expos of Russia's vast disinformation campaign from a Finnish journalist persecuted for her persistent reporting of its brazen abuses...a damning portrait of Putin and his autocratic, manipulative regime."--Kirkus

"By exposing Putin's institutionalized trolling operations Jessikka Aro has gone where no one has had the courage to go before and has done so at great peril. Ms. Aro has done the world a huge service by showing us how these tactics work so we can better defend ourselves going forward."--Bill Browder

"An important book for those who want to understand the complex and confusing ways reality is manufactured in the digital era. Aro's story shines a bright light on the dark world of online information manipulation operations that can upend the lives of individuals and the health of democracies."--Liz Wahl

A chilling account of Russian information warfare, Putin's Trolls exposes the individuals and organizations behind the Kremlin's coordinated, military-style social media operations against the West.

In this courageous and unflinching book, award-winning journalist Jessikka Aro interweaves her own dramatic story as a target of Russian social media propaganda with accounts from many internationally known critics of the Kremlin, who share their own stories of being targeted by Russia's multifaceted cyber warfare campaigns. As Jessikka began to investigate the impact of the Kremlin's troll operations outside of Russia, she learned that private citizens in many other countries were being victimized by Kremlin-designed information campaigns. These actions were frequently conducted through an organized "troll factory" led by Russia's security and intelligence apparatus, using unregulated social media platforms including YouTube, Facebook and Twitter. Many of the disinformation campaigns were centered around the 2014 Russian invasion of Ukraine and subsequent occupation of the Crimean Peninsula.

Jessikka Aro is an award-winning investigative reporter with the Finnish Broadcasting Company, specializing in Russia, information warfare, security and extremism. In 2014, she started to investigate the influence of pro-Russian social media trolls' in Finland and beyond. Immediately after that, she herself became a target of an ongoing, aggressive and criminal fake news campaign by pro-Kremlin propagandists. In 2016, Aro was awarded the respected Bonnier Journalism Prize for her Russian troll investigations, which were published in Finnish, English and Russian. The results of her ground-breaking investigations have been quoted in international media and research, and she continues to educate the public of the Russian influence and meddling in Western societies. Earlier in her career, Aro lived, studied and worked as a journalist in Russia. In 2019, she published, Putin's Trolls, a best-selling investigative book about the Kremlin's information warfare. Originally published in Finnish, the book has been translated into several languages. That same year, the US State Department awarded her the International Women of Courage Award, but the award was mysteriously rescinded by the Trump administration allegedly due to her social media criticism of President Trump. Jessikka lives in Helsinki, Finland.