Sergeant York: His Own Life Story and War Diary (Paperback) 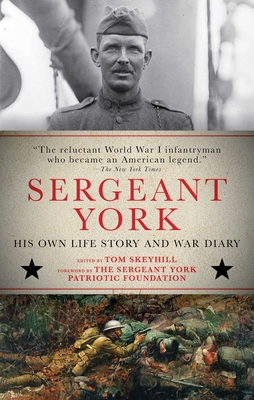 If you have seen the classic Gary Cooper film, you know about Sergeant York. But to really know the American hero, you need to read his own story in his own words. “An American legend.”—The New York Times

October 8th, 1918—amid the last of the Allies attempts to the Germans, Sergeant Alvin York of Tennessee, found himself and his platoon of only seventeen men trapped in the thick of heavy machine gun fire. Rather than retreating or calling upon the artillery to take out the nest, York single-handedly took out twenty-five Germans, dropping them one-by-one, and captured many more.

This is only one of the many tales of York’s famed heroism, which were heralded as some of the most impressive battle stories in history of modern warfare. Sergeant York contains the legendary soldier’s war diaries, which offer up-close snapshots of his fabled military career.

Included in this new edition of a classic work are new forewords written by York’s son and grandson, which provide both personal and historical recollections of their predecessor. In Sergeant York, experience the fascinating life of an American hero.

Alvin York, or “Sergeant York,” was born in Pall Mall, Tennessee, in 1887. He was drafted into the army and swiftly became one of the most decorated and accomplished soldiers in World War I, having received the Congressional Medal of Honor for his heroic action in the Meuse-Argonne Offensive, among other notable accolades. When he returned from the war, he was greeted with public outpouring and celebration, largely due in part to an article in the Saturday Evening Post that had circulated prior to his arrival, which detailed York’s heroic actions publicly to a large readership. York passed away in 1964 at the age of 76.