It's Better to Be Feared: The New England Patriots Dynasty and the Pursuit of Greatness (Hardcover) 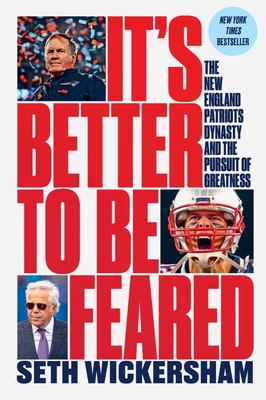 The explosive, long-awaited account of the making of the greatest dynasty in football history—from the acclaimed ESPN reporter who has been there from the very beginning.

Over two unbelievable decades, the New England Patriots were not only the NFL’s most dominant team, but also—and by far—the most secretive. How did they achieve and sustain greatness—and what were the costs?

In It’s Better to Be Feared, Seth Wickersham, one of the nation’s finest investigative sportswriters, presents the definitive account of the New England Patriots dynasty, capturing the brilliance, ambition, and ruthlessness that powered it. Having covered the team since Tom Brady took over as starting quarterback in 2001, Wickersham draws on an immense range of sources, including previously confidential game plans, scouting reports, and internal studies as well as hundreds of interviews gathered over two decades—with Brady, Bill Belichick, and other players, coaches, and front office personnel—to offer a behind-the-scenes chronicle of the dynasty’s three acts: the initial burst of Super Bowls from 2001 to 2005; the plateau period, 2006 to 2014, stalked by scandal, injury, and near-misses; and the second three Super Bowl victories between 2015 and 2019, which allowed the Patriots to make their claim upon history.

At every step, Wickersham demonstrates just how Belichick and Brady shaped the Patriots and reshaped the entire NFL. We are taken deep into Belichick’s tactical mind, odd work habits, and strained relationships, including his sincere but unspoken love for the players and a near fistfight with a former assistant coach. It is an illuminating depiction of a mastermind, and an organization, dedicated not only to winning but to breaking a league designed to prevent the emergence of a single, unbeatable team.

Yet it is in Wickersham’s portrait of Brady—from his childhood in northern California to his challenging years at the University of Michigan to his astonishing early superstardom in the NFL—that the source of the Patriots’ sheer endurance comes into focus. Even as he navigated an improbable rise to fame, Brady was driven by a totalizing ambition to be great, not as an endpoint, but as an ever-unfolding process. Sustaining greatness, however, came with a price. Wickersham reveals, to an extent no other journalist has, the clashes among the coach, the quarterback, and the owner, Robert Kraft—conflicts that resulted in the team’s best performances but also, eventually, the dissolution of the dynasty itself.

Raucous, unvarnished, and propulsive, It’s Better to Be Feared is an instant classic of American sportswriting, and an unforgettable study of what it takes to reach, and remain at, the summit of human achievement.

Seth Wickersham is a senior writer at ESPN. He has been a finalist for the National Magazine Award and his stories have been anthologized in The Best American Magazine Writing and The Best American Sports Writing, among other places. He lives in Connecticut.

[A]n honest, sprawling, meticulously reported, and beautifully written portrayal of perhaps the greatest and probably the most unlikely dynasty in modern professional sports . . . [Wickersham] draws richly detailed portraits of Brady, Belichick, the dynasty’s third constant in owner Robert Kraft, and how their personalities and relationships changed through the years . . . It’s Better to Be Feared is the accounting the Patriots dynasty deserves.

[A] superlative sports book full of intimate, fly-on-the-wall reporting, savvy insights and deft, page-turning writing. . . . Chapter after chapter, the author takes the reader inside the Patriots’ locker and trainers’ rooms, into coaches’ meetings, into the huddle and onto the line of scrimmage. There’s plenty of eavesdropping on the NFL owners’ contentious meetings with Commissioner Roger Goodell, too. The result is the best picture I’ve ever encountered of what the cutthroat, multibillion-dollar world of NFL football is actually like.
— Edward Kosner - Wall Street Journal

[T]he best book written about the Patriots to date. It encompasses the entirety of the Bill Belichick-Tom Brady dynasty: nine AFC championships and six Super Bowl championships. It delves deeply into the histories of Belichick, Brady, Robert Kraft, and several important figures of the dynasty: Julian Edelman, Josh McDaniels, Malcolm Butler, Peyton Manning, Roger Goodell, Eric Mangini, and many more. The good, great, bad, and worse are covered here, but not in a scandalous way, and not in a way that wastes extra time on extraneous stories. The focus of the book, and the fact that Wickersham has been covering the team and league since the dynasty’s advent, make it special.
— Boston.com, 2021 Gift Guide

The book consistently delivers that type of fly-on-the-wall access, taking the reader to seemingly impenetrable places . . . Reporters have breathlessly covered the Patriots over the years, leaving little room for new reveals, but Wickersham advances the ball with anecdotes that unpeel the personalities of the franchise’s significant figures.
— Mark Selig - Washington Post

Wickersham, with thorough reporting and the experience of covering New England’s twists and turns, manages a noteworthy feat in It’s Better to be Feared—he humanizes Brady, Belichick and the Patriots owner Robert Kraft for outsiders in a way that can be exceedingly difficult . . . Their history is told in parallel with the growth of the N.F.L. itself.

[C]ontains an array of juicy details about Brady’s turbulent final years in New England . . . While those details — Belichick’s clandestine friendship with Roger Goodell, Brady approaching the 49ers at the start of his free agency — are scintillating, they are the garnish on top of a well-constructed narrative that spans the arc of 20 years . . . Wickersham's storytelling is gripping.
— Alex Reimer - WEEI

Wickersham’s fly-on-the-wall accounts are fascinating, but he’s at his best when he explains, carefully and evenhandedly, how the business of football works. . . Exemplary sports journalism that examines the front office and dueling egos as much as the gridiron.
— Kirkus Reviews, starred review

This enthralling behind-the-scenes tale of the New England Patriots is a piece of journalistic excellence . . . Patriots fans will revel in all the little-known backstories, while all football fans and readers seeking astonishing success stories will relish this, too.
— Robert St. John - Booklist

A skilled journalist analyzes the success of the NFL’s premier team over the last two decades, in both its laudable and unsavory aspects; [it] will be of interest to all sports fans.
— John Maxymuk - Library Journal

While there is no shortage of books available on the New England Patriots dynasty, Seth Wickersham’s new work may be the best yet... So good that even casual NFL fans will want to check [it] out.... Of the many books written on [Brady and Belichick], it seems that Wickersham delivers the deepest and most insightful portrait of either of them within these pages... Engaging and artfully written, drawing the reader into the events [Wickersham] describes, making them feel as if they are witnessing these meetings and games themselves.... One of the best books on the NFL to appear in recent years.
— Micah Wimmer - Fansided