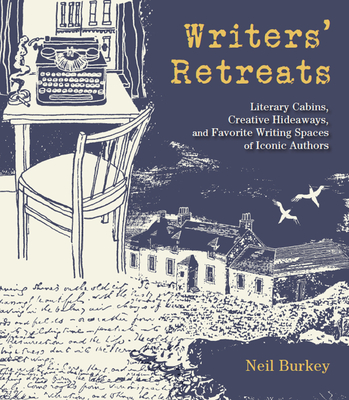 Featuring over 50 writers and their getaways--get a glimpse into the creative habits of some of the greatest writers of the last two centuries.

From Henry David Thoreau's famous cabin at Walden Pond and James Baldwin's 'Welcome Table' in Provence, to Roald Dahl's garden hut and Toni Morrison's sunrise-lit couch at dawn, Writers' Retreats reveals the quirky, private, and sometimes curious places where literary magic has happened. Each location is brought to life through illustration and the writer's own words on what made that place so perfect for creating.

An exploration of famous literary writers of past and present, from Emily Dickinson and Marcel Proust to Margaret Atwood, Chimamanda Ngozi Adichie, and Alice Munro, this is the perfect bookish gift for both writers and booklovers to feed their fascination with what ignited the creativity behind their favorite works of literature.

Neil Burkey was raised in Illinois and writes in Dublin, Ireland, finding retreats wherever he can. He has had several short stories published in the Dublin Review and Guts magazine, and received a Literature Bursary Award from the Arts Council of Ireland in 2015. His essays have appeared in the Irish Times and the UK Independent. This is his first book, although in his role as an editor he has worked on titles for the European Court of Justice in Strasbourg, the Bush Theatre in London and Merton College in Oxford.