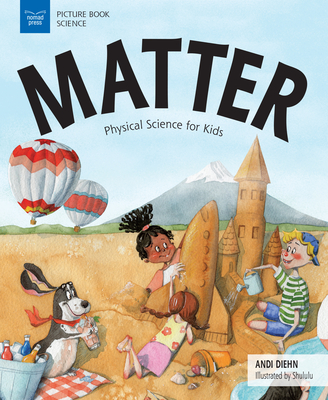 Matter: Physical Science for Kids from the Picture Book Science series gets kids excited about science

What's the matter? Everything is matter

Everything you can touch and hold is made up of matter--including you, your dog, and this book Matter is stuff that you can weigh and that takes up space, which means pretty much everything in the world is made of matter.

In Matter: Physical Science for Kids, kids ages 5 to 8 explore the definition of matter and the different states of matter, plus the stuff in our world that isn't matter, such as sound and light In this nonfiction picture book, children are introduced to physical science through detailed illustrations paired with a compelling narrative that uses fun language to convey familiar examples of real-world science connections. By recognizing the basic physics concept of matter and identifying the different ways matter appears in real life, kids develop a fundamental understanding of physical science and are impressed with the idea that science is a constant part of our lives and not limited to classrooms and laboratories.

Simple vocabulary, detailed illustrations, easy science experiments, and a glossary all support exciting learning for kids ages 5 to 8. Perfect for beginner readers or as a read aloud nonfiction picture book

Part of a set of four books in a series called Picture Book Science that tackles different kinds of physical science (waves, forces, energy, and matter), Matter offers beautiful pictures and simple observations and explanations. Quick STEM activities such as weighing two balloons to test if air is matter help readers cross the bridge from conceptual to experiential learning and provide a foundation of knowledge that will prove invaluable as kids progress in their science education.

Perfect for children who love to ask, "Why?" about the world around them, Matter satisfies curiosity while encouraging continual student-led learning.

Picture Book Science presents real-world examples of physical science and engineering topics kids find fascinating These nonfiction picture books consist of engaging narratives paired with brightly colored, whimsical illustrations drawn by an accomplished scientist. With these books, readers ages 5 to 8 are encouraged to expand their definitions of the words "force," "matter," "energy," and "wave." Elementary-aged children are equipped to recognize basic science concepts and identify the different ways they are demonstrated in real life, while being impressed with the idea that science is a constant part of our lives and not limited to classrooms and laboratories.

Titles in the series include: Waves; Forces; Matter; and Energy.

Andi Diehn is the author of Explore Poetry! With 25 Great Projects, Technology: Cool Women Who Code, and Shakespeare: Investigate the Bard's Influence on Today's World for Nomad Press. She lives in Enfield, NH, with her family. Shululu (Hui Li) has always been driven by curiosity. She received a PhD in computational chemistry from the University of Chicago. Her research has been published in the world's most influential science journals, including Science and Proceedings of the National Academy of Sciences. She is devoted to bringing joy and science to young readers through fun illustrations! She lives with her husband in New York, NY.