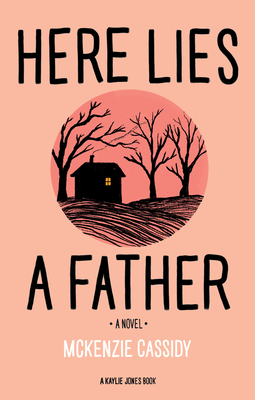 Fifteen-year-old Ian Daly's moral universe is turned upside down when, at this father's funeral, he discovers that his father had two secret families.

Cassidy's debut is affecting...Like the best coming-of-age novels, Here Lies a Father grounds its big concerns in the exquisite particulars of one person's life.
--Literary Hub

"Mckenzie Cassidy stuns with his beautiful debut novel, Here Lies a Father. Told as a classic coming-of-age story, Cassidy's narrator, fifteen-year-old Ian Daly, is a nuanced combination of the naivete of Huckleberry Finn and the shrewdness of Holden Caufield.
--Southern Review of Books

Ian is a worthy literary cousin of Holden Caulfield, another kid with little tolerance for fakes and phonies and too much hard-won skepticism for his age. The grown-ups have let Ian down; now he must create himself.
--Kirkus Reviews

If you're looking for a good, quicker read that will get you thinking about family life, mental health and how the environment someone grew up in can affect how they are as a person, I'd definitely recommend Here Lies A Father.
--Girls at the Rock Show

Here Lies a Father is a fantastic, page-turning read, chock full of surprises and deeply manifesting home truths and their layered meanings, and so clearly points to the fact that even after just the one book, Mckenzie Cassidy has hit a literary home run.
--Exclusive Magazine

Here Lies A Father is a coming of age story ripe with secrets and lies. Mckenzie Cassidy captures all the wonder and confusion of one teen's rites of passage as he grapples with the truth about his parents and the mystery of the past.
--Stewart O'Nan, author of Snow Angels

Keenly observed and beautifully written, Mckenzie Cassidy's Here Lies a Father follows a blue-collar Holden Caulfield through a weekend odyssey of family secrets, lies, and revelations. It's a novel for anyone who has ever wondered about their parents' pasts--I couldn't put it down.
--Sara Pritchard, author of Help Wanted: Female

A marvelous read, full of surprises, home truths, and excellent prose. Mckenzie Cassidy has joined the illustrious ranks of Ivan Turgenev and his classic Fathers and Sons.
--John Bowers, author of The Colony

Here Lies A Father is a raw balance of beauty and sadness, both a compelling page-turner and a call to linger over each of Cassidy's exquisitely crafted sentences.
--Libby Cudmore, author of The Big Rewind

When Ian Daly and his sister Catherine arrive for their wayward father's funeral in his small and desolate upstate New York hometown, a secret that was kept from them their entire lives emerges: their father Thomas abandoned two other families, leaving behind two furious wives and several children who never knew their father. Ian wants to know more of the truth, but his sister and mother want to preserve the carefully constructed myth they've created around who Thomas really was.

In the cold, lonely winter landscape of small-town New York, fifteen-year-old Ian sets out alone to learn the truth about his father's past and the families he left behind. Here Lies a Father examines the long-term effects shameful secrets have on a family, and how difficult it is for a young man to reconstruct his own sense of right and wrong, when every value and moral principle he was ever taught was based on a lie.

Mckenzie Cassidy is a writer, journalist, marketer, and professor living in Fort Myers, Florida. His work has appeared in the anthology Walk Hand in Hand into Extinction: Stories Inspired by True Detective, Flash Fiction Magazine, Florida Weekly, and in multiple newspapers throughout southwest Florida. He holds an MFA from Wilkes University and is a regular blogger for the Florida Writers Association. Here Lies a Father is his first novel. Learn more at mckenziecassidy.com.