Poor Economics: A Radical Rethinking of the Way to Fight Global Poverty (Paperback) 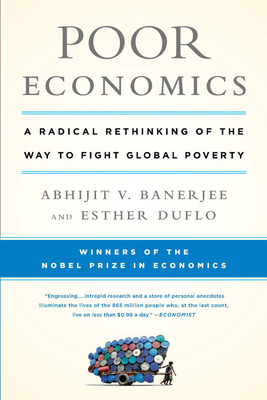 The winners of the Nobel Prize in Economics upend the most common assumptions about how economics works in this gripping and disruptive portrait of how poor people actually live.

Why do the poor borrow to save? Why do they miss out on free life-saving immunizations, but pay for unnecessary drugs? In Poor Economics, Abhijit V. Banerjee and Esther Duflo, two award-winning MIT professors, answer these questions based on years of field research from around the world. Called "marvelous, rewarding" by the Wall Street Journal, the book offers a radical rethinking of the economics of poverty and an intimate view of life on 99 cents a day. Poor Economics shows that creating a world without poverty begins with understanding the daily decisions facing the poor.

Abhijit Banerjee, winner of the 2019 Nobel Prize in Economics, is the Ford Foundation International Professor of Economics at the Massachusetts Institute of Technology, and a co-founder and co-director of the Abdul Latif Jameel Poverty Action Lab (J-PAL). In 2011, he was named one of Foreign Policy magazine's top 100 global thinkers. Banerjee served on the U.N. Secretary-General's High-level Panel of Eminent Persons on the Post-2015 Development Agenda. He lives in Cambridge, Massachusetts.

Esther Duflo, winner of the 2019 Nobel Prize in Economics, is the Abdul Latif Jameel Professor of Poverty Alleviation and Development Economics in the Department of Economics at the Massachusetts Institute of Technology and a co-founder and co-director of the Abdul Latif Jameel Poverty Action Lab (J-PAL). Duflo is a member of the American Academy of Arts and Science, and has received numerous academic honors and prizes including the Princess of Asturias Award for Social Sciences (2015), the Infosys Prize (2014), the Dan David Prize (2013), a John Bates Clark Medal (2010), and a MacArthur "Genius Grant" Fellowship (2009). Duflo is a member of the President's Global Development Council and a Founding Editor of the American Economic Journal: Applied Economics, and is currently the editor of the American Economic Review. She lives in Cambridge, Massachusetts.

By the winners of the 2019 Nobel Prize in Economics


"Marvelous, rewarding... the sheer detail and warm sympathy on display reflects a true appreciation of the challenges their subjects face. They have fought to establish a beachhead of honesty and rigor about evidence, evaluation and complexity in an aid world that would prefer to stick to glossy brochures and celebrity photo-ops. For this they deserve to be congratulated--and to be read."—The Wall Street Journal

"Fascinating and captivating. Their work reads like a version of Freakonomics for the poor. There are insights into fighting global poverty from the remarkable and vital perspective of those whom we profess to serve. They remind us, I think, of our shared humanity and how at some fundamental levels we really do think alike."—Fast Company

"To cut to the chase: this is the best book about the lives of the poor that I have read for a very, very long time. The research is wide-ranging. Much of it is new. Above all, Banerjee and Duflo take the poorest billion people as they find them. There is no wishful thinking. The attitude is straightforward and honest, occasionally painfully so. And some of the conclusions are surprising, even disconcerting."—The Economist

"A compelling and important read... An honest and readable account about the poor that stands a chance of actually yielding results."—Forbes.com

"Duflo and Banerjee tell these stories (of their randomised control trials) in a lovely new book called Poor Economics. As they admit, randomistas cannot answer some big questions--how to tackle food prices, for instance. But through lots of microstudies, they make a subtle case for one big argument: aid really can help poor people, provided the money follows the evidence."—The Guardian

"The ingenuity of these experiments aside, it is the rich and humane portrayal of the lives of the very poor that most impresses. Both books show how those in poverty make sophisticated calculations in the grimmest of circumstances. Books such as these offer a better path forward. They are surely an experiment worth pursuing."—Financial Times

"Randomized trials are the hottest thing in the fight against poverty, and two excellent new books have just come out by leaders in the field. One is Poor Economics by Abhijit Banerjee and Esther Duflo. These terrific books move the debate to the crucial question: What kind of aid works best?"—The New York Times

"Their empirical approach differs from policy discussions that base support or criticism of aid programs on a broad overview; instead they illuminate many practicable and cost-effective ways to keep children and parents living healthier and more productive lives. An important perspective on fighting poverty."—Publishers Weekly

"Here's something Jesus might recommend: Reading the clear, calm and revelatory book Poor Economics from Abhijit Banerjee and Esther Duflo. It is gloriously instructive, and bracing testimony in itself to the gold standard of the Enlightenment: the scientific method. The authors, both economists at MIT, spent 15 years in the field, running randomized controlled trials to test various approaches to combating poverty. They bring both rigor and humility to a predicament typically riven by ideology and blowhards."—Cleveland Plain Dealer

"This new book by Abhijit Banerjee and Esther Duflo eschews the ideology of both the right and the left, and focuses on what measurable evidence has to say about the often-conflicting myths that dominate discussion of international development. The book is unusual, perhaps unique, in that the authors took a lot of time to talk to poor people about what they think and what they want."—Vancouver Sun

"Banerjee and Duflo assemble a fascinating assortment of interventions from across the globe in their book...It is engaging and informative — which is more than can be said for many books of this genre."—Business World (India)

"This is a welcome shift in methodology as it implicitly concedes the need to combine social science with hard economics."—IndianExpress.com

"It vividly, sensitively and rigorously brings alive the dilemmas of the poor as economic agents in a variety of contexts, whether as consumers or risk-takers. There are splendid chapters on a variety of topics that affect the poor: food, health, education, savings, micro-credit, insurance, risk and even some cursory observations on political behaviour."—Outlook India

"A remarkable work: incisive, scientific, compelling and very accessible, a must-read for advocates and opponents of international aid alike, for interested laymen and dedicated academics. Amartya Sen, fellow Nobel Prize winner Robert Solow and superstar economics author Steven Levitt wholeheartedly endorse this book. I urge you to read it. It will help shape the debate in development economics."—Financial World (UK)

"A marvellously insightful book by two outstanding researchers on the real nature of poverty."—Amartya Sen

"This book is a must-read for anyone who cares about world poverty. It has been years since I read a book that taught me so much. Poor Economics represents the best that economics has to offer."—Steven D. Levitt

"Abhijit Banerjee and Esther Duflo are allergic to grand generalizations about the secret of economic development. Instead they appeal to many local observations and experiments to explore how poor people in poor countries actually cope with their poverty: what they know, what they seem (or don't seem) to want, what they expect of themselves and others, and how they make the choices that they can make. Apparently there are plenty of small but meaningful victories to be won, some through private and some through public action, that together could add up to a large gains for the world's poor, and might even start a ball rolling. I was fascinated and convinced."—Robert Solow