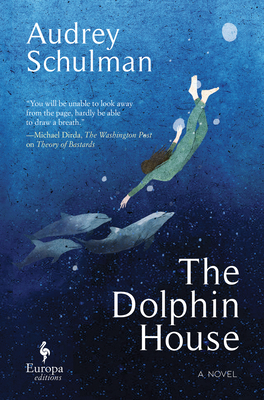 Schulman once again shows her special literary relationship with animals that lets her weave together human stories with analogies to some of the world’s wild and intelligent mammals!. Deaf Cora discovers she can “hear” the dolphins underwater and ends up as a research assistant to Dr. Blum, but her strong bond with the dolphins eventually puts her on collision course with the scientists.

Based on the true story of the 1965 "dolphin house" experiment, this spellbinding novel captures the tenor of the social experiments of the 1960s in award-winning author Audrey Schulman's tightly paced and evocative style.

It is 1965, and Cora, a young, hearing impaired woman, buys a one-way ticket to the island of St. Thomas, where she discovers four dolphins held in captivity as part of an experiment led by the obsessive Dr. Blum. Drawn by a strong connection to the dolphins, Cora falls in with the scientists and discovers her need to protect the animals.

Recognizing Cora's knack for communication, Blum uses her for what will turn into one of the most fascinating experiments in modern science: an attempt to teach the dolphins human language by creating a home in which she and a dolphin can live together.

As the experiment progresses, Cora forges a remarkable bond with the creatures, until her hard-won knowledge clashes with the male-dominated world of science. As a terrible scandal threatens to engulf the experiment, Cora's fight to save the dolphins becomes a battle to save herself.