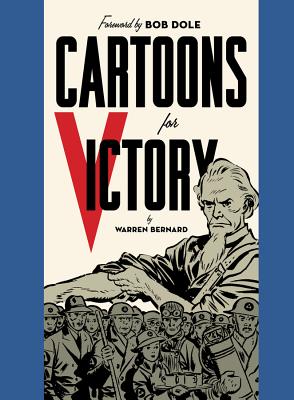 This book showcases comics about Superman, Donald Duck, Mickey Mouse, and other characters and (their creators) helping to fight World War II.

The home front during World War II was one of blackouts, Victory Gardens, war bonds and scrap drives. It was also a time of social upheaval with women on the assembly line and in the armed forces and African-Americans serving and working in a Jim Crow war effort. See how Superman, Donald Duck, Mickey Mouse and others helped fight World War II via comic books and strips, single-panel and editorial cartoons, and even ads. Cartoons for Victory showcases wartime work by cartoonists such as Charles Addams (The Addams Family), Harold Gray (Little Orphan Annie), Harvey Kurtzman (Mad magazine), Will Eisner, as well as many other known cartoonists. Over 90% of the cartoons and comics in this book have not been seen since their first publication. Editor Bernard gathered them over years of unstinting research through private collections and the obscure holdings of public sources. This is the most comprehensive collection ever assembled of World War II–era cartoons, reflecting the indefatigable spirit of the Home Front in America.

Warren Bernard is Executive Director of the Small Press Expo (SPX) independent sequential art festival, and is a comics-focused writer and historian. He co-authored the Eisner Award-nominated book Drawing Power, and has extensively researched and written about the 1950s Juvenile Delinquency / Senate Comic Book Hearings. A contributor to more than a dozen books, he often provides rare materials from his own extensive collection. Both the Library of Congress and the Center for Cartoon Studies (CCS) have hosted his lectures. He lives in Bethesda, Maryland.

Bob Dole (b. 1923) is a politician who served in World War II.  He is the author of several books, and the recipient of the U.S. Senator John Heinz Award for Greatest Public Service by an Elected or Appointed Official.

During WWII, the U.S. was united as never before or since, with the entire civilian populace pitching in to

support the war effort. That included the nation’s cartoon characters, who were enlisted in propaganda

efforts designed to motivate the home front. ... An enlightening, entertaining glimpse at a less-remembered aspect of that much-documented era.
— Gordon Flagg - Booklist

Cartoons for Victory is a moving, time-transporting way to salute the troops past and present ... Bernard mines the times for an embarrassment of visual riches. ... From beginning to endpapers, this is a tour of art and duty well worth serving.

What could have been an ordinary collection of World War II-era political cartoons is instead a fascinating history lesson that breaks through boundaries between media. ... The result is an overview of news, politics and daily life in wartime America that is more informative than the history books that expressly explore that material. ... Cartoons for Victory was such a delight that the only way to make it better would be to make it longer.

Warren Bernard’s gorgeous new collection of rare drawings from the war years, Cartoons for Victory, ...features single-panel editorial cartoons as well as comic strips and advertisements, boasting a high percentage of previously unseen material. ... The shock of witnessing characters like Batman and Donald Duck talking about the 20th century’s largest war is akin to discovering a photo of your grandmother in an embarrassing outfit, taken decades before you were born.

This delicious retrospective of U.S. cartoonists’ response to WWII is agitprop at its best. The book goes well beyond reprinting the familiar editorial cartoons and looks instead at how some of the best magazine illustrators and comic strip artists of the day joined the cause in recruitment, war support, bond drives, etc.
— Steve Smith - min