Report of the Adjutant General of the State of Kentucky: Soldiers of the War of 1812., with a New Added Index. (Paperback) 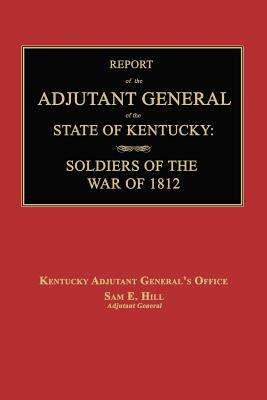 More than 25,000 Kentuckians served in the War of 1812, which was approximately 83 percent of the Kentucky men then of military age. Fighting against both the British and their Native American allies, Kentucky sent a total of 36 regiments, four battalions, and twelve independent companies to the field, an almost unbelievable accomplishment considering the state's small total population of 400,000 at the time the War began. This Report of the Adjutant General of the State of Kentucky: Soldiers of the War of 1812, was completed in 1891, and contains the rosters and/or muster rolls of the regiments and subordinate units. Each roster consists of the names of the officers and soldiers, both regular and militia, assigned to the unit; their rank; their date of appointment or enlistment; to what time they were engaged or enlisted; with remarks regarding miscellaneous information, such as discharge, date of death, desertion, captured, etc. This work contains the names of approximately 25,000 soldiers and officers, all of which are listed in a newly added all-name index.