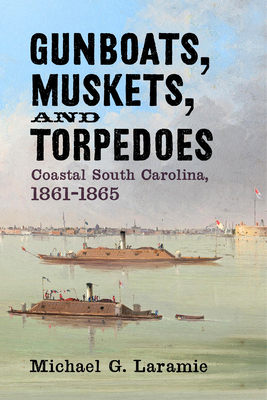 From the surrender of Fort Sumter to the evacuation of Charleston, Gunboats, Muskets, and Torpedoes: Coastal South Carolina, 1861–1865 details the contest for the South Carolina coastline during the American Civil War. While the southern shoreline of the state would be dominated by Union amphibious raids to cut the Savannah-Charleston railroad and the establishment of a Union army and navy facility at Port Royal, the contest for coastal South Carolina burned the brightest at Charleston. One of the primary ports of the Confederacy, the siege of this city would last from early 1863 until the last months of the war. It was during these operations that the industrial age first introduced elements of modern warfare at a scale that the world noticed. The ironclad, the newest of the wonder weapons, tested its abilities against the naval fortifications and the artillery of the day, while others such as the torpedo boat and the forerunner of generations beyond, the submarine, were demonstrated with stunning effect. Nor were these matters confined to just maritime affairs as the trench warfare, artillery barrages, bombproof shelters, wire obstructions, and one of the first minefields amply demonstrated.
While these technological changes and the philosophies they spawned are easily discerned today, they are but part of a much larger story; one of ordinary people thrust into extraordinary circumstances. A familiar tale of foolishness and brilliance, of bravery and fear, and of mistakes and opportunity. From the soldiers that crouched in the shaking bombproofs of Fort Wagner and those who flung themselves against this fortress, through the monotonous routine of blockade duty and the incessant artillery duels on both sides, to the bravery of the first Black soldiers who fought for the Union, and those who refused to yield or looked to break the deadlock with a stroke of genius, this is their story. A story of victor, vanquished, and those who found themselves swept up in the fury of change.

Michael G. Laramie is the author of the companion volume, Gunboats, Muskets, and Torpedoes: Coastal North Carolina, 1861–1865. He is also author of King William’s War: The First Contest for North America, 1689–1697, winner of the New York Society of Colonial Wars Annual Book Award, Queen Anne's War: The Second Contest for North America, 1702–1713, and By Wind and Iron: Naval Campaigns in the Champlain Valley, 1665–1815. He lives with his family in Arizona.