Plant Intelligence and the Imaginal Realm: Beyond the Doors of Perception into the Dreaming of Earth (Paperback) 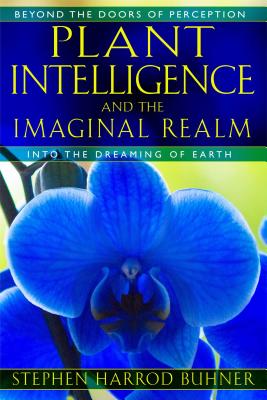 • Provides exercises to directly perceive and interact with the complex, living, self-organizing being that is Gaia

• Examines the ecological function of invasive plants, bacterial resistance to antibiotics, psychotropic plants and fungi, and the human species

In Plant Intelligence and the Imaginal Realm, Stephen Harrod Buhner reveals that all life forms on Earth possess intelligence, language, a sense of I and not I, and the capacity to dream. He shows that by consciously opening the doors of perception, we can reconnect with the living intelligences in Nature as kindred beings, become again wild scientists, nondomesticated explorers of a Gaian world just as Goethe, Barbara McClintock, James Lovelock, and others have done. For as Einstein commented, “We cannot solve the problems facing us by using the same kind of thinking that created them.”

Buhner explains how to use analogical thinking and imaginal perception to directly experience the inherent meanings that flow through the world, that are expressed from each living form that surrounds us, and to directly initiate communication in return. He delves deeply into the ecological function of invasive plants, bacterial resistance to antibiotics, psychotropic plants and fungi, and, most importantly, the human species itself. He shows that human beings are not a plague on the planet, they have a specific ecological function as important to Gaia as that of plants and bacteria.

Buhner shows that the capacity for depth connection and meaning-filled communication with the living world is inherent in every human being. It is as natural as breathing, as the beating of our own hearts, as our own desire for intimacy and love. We can change how we think and in so doing begin to address the difficulties of our times.

Stephen Harrod Buhner is an Earth poet and the award-winning author of ten books on nature, indigenous cultures, the environment, and herbal medicine. He comes from a long line of healers including Leroy Burney, Surgeon General of the United States under Eisenhower and Kennedy, and Elizabeth Lusterheide, a midwife and herbalist who worked in rural Indiana in the early nineteenth century. The greatest influence on his work, however, has been his great-grandfather C.G. Harrod who primarily used botanical medicines, also in rural Indiana, when he began his work as a physician in 1911.

Stephen's work has appeared or been profiled in publications throughout North America and Europe including Common Boundary, Apotheosis, Shaman's Drum, The New York Times, CNN, and Good Morning America. www.gaianstudies.org

“This is a rare and splendid book that takes you right into the heart and soul of the world. Read it and be transformed.”
— Stephan Harding, Ph.D., head of Holistic Science, Schumacher College, UK, and author of Animate Eart

“The twentieth century was the great age of physics, and the twenty-first is the age of biology. According to Stephen Harrod Buhner, we must interact empathically with the biosphere by opening our perceptual gates to perceive through all body sensations. He deliciously explores music, writing, art, and plants as tools for reclaiming our feeling sense of nature. Plant Intelligence and the Imaginal Realm is a work of heartfelt wisdom written so exquisitely that it took my breath away, a must read for anyone who wants to achieve keystone intelligence--empathic immersion within Earth’s dreaming.”
— Barbara Hand Clow, author of Awakening the Planetary Mind: Beyond the Trauma of the Past to a New Er

“Stephen Harrod Buhner’s The Lost Language of Plants and The Secret Teaching of Plants taught a generation of herbalists to trust our sense that the world was alive and speaking to us. Plant Intelligence and the Imaginal Realm takes us further down that path of remembering and re-enchantment, awakening our capacity to tap directly in to the Gaian mind. Be warned: if you read this book, you will never be the same again.”
— Sean Donahue, traditional herbalist and instructor, School of Western Herbal Medicine at Pacific Rim

“There is much magic, and a wealth of wisdom in this book. It is a wisdom that anyone can come, not only to understand, but to live within. To take this journey is to embrace a great healing, and to release a great burden. The healing answers your deepest longing, I won't say what the burden is, but you will know it when you let it go.”
— The Fall Buyers MetaGuide, September 2014