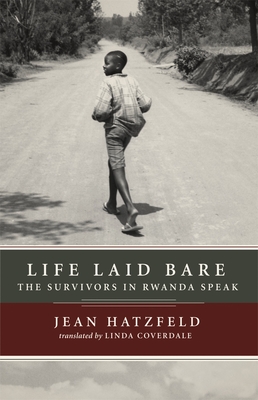 "To make the effort to understand what happened in Rwanda is a painful task that we have no right to shirk–it is part of being a moral adult."
–Susan Sontag

In the late 1990s, French author and journalist Jean Hatzfeld made several journeys into the hilly, marshy region of the Bugesera, one of the areas most devastated by the Rwandan genocide of April 1994, where an average of five out of six Tutsis were hacked to death with machete and spear by their Hutu neighbors and militiamen. In the villages of Nyamata and N'tarama, Hatzfeld interviewed fourteen survivors of the genocide, from orphan teenage farmers to the local social worker. For years the survivors had lived in a muteness as enigmatic as the silence of those who survived the Nazi concentration camps. In Life Laid Bare, they speak for those who are no longer alive to speak for themselves; they tell of the deaths of family and friends in the churches and marshes to which they fled, and they attempt to account for the reasons behind the Tutsi extermination. For many of the survivors "life has broken down," while for others, it has "stopped," and still others say that it "absolutely must go on."

These horrific accounts of life at the very edge contrast with Hatzfeld's own sensitive and vivid descriptions of Rwanda's villages and countryside in peacetime. These voices of courage and resilience exemplify the indomitable human spirit, and they remind us of our own moral responsibility to bear witness to these atrocities and to never forget what can come to pass again. Winner of the Prix France Culture and the Prix Pierre Mille, Life Laid Bare allows us, in the author's own words, "to draw as close as we can get to the Rwandan genocide."

Jean Hatzfeld
Jean Hatzfeld, an international reporter for Libération since 1973, is the author of many books, including two on the war in Croatia and Bosnia and Machete Season: The Killers in Rwanda Speak, winner of the Prix Joseph Kessel. He lives in Paris.

Linda Coverdale
Linda Coverdale has a Ph.D. in French, is a Chevalier de l’Ordre des Arts et des Lettres, and is the award-winning translator of almost fifty books. Her most recent honor is the 2006 Scott Moncrieff Prize for Jean Hatzfeld’s Machete Season: The Killers in Rwanda Speak.

Dave Eggers, author of What Is the What

“Jean Hatzfeld's Machete Season, wherein the perpetrators of the Rwandan genocide spoke about their crimes, was an astonishing feat of reportage and oral history. Life Laid Bare, which allows the victims to speak, is an even greater achievement—a book so elegantly wrought, so unexpected and revelatory, that it's absolutely essential reading in understanding what happened in Rwanda, how the survivors of genocide find a way to begin again while never forgetting to bear witness. As Marie-Lousie Kagoyire, one of the narrators says, ‘[S]howing our hearts to a stranger, talking about how we feel, laying bare our feelings as survivors, that shocks us beyond measure.’”

French journalist and war correspondent Hatzfeld offers brief, pithy accounts of 14 survivors of the Rwandan genocide of 1994, in which 10,000 Tutsis seeking refuge in churches were slaughtered by machete-wielding Hutus...Even though each account tells the same harrowing story, each voice is unique. Bringing cumulative power to what, in lesser hands, might have been a random collection of historical accounts, Hatzfeld's wrenching collection compels an active response to the genocides occurring today.

For each of the 14 interviewed today, Hatfeld fills in the background and provides a black-and-white photo. Those photos, accompanied by the clear personal voices, break your heart. The daily struggle with survivor guilt and outsiders’ indifference is part of a constant connection with the Holocaust.

As he did in Machete Season: The Killers in Rwanda Speak (2005), journalist Hatzfeld provides informative introductions to each chapter but allows his subjects to speak for themselves. The collection’s devastating power comes from the no-holds-barred narratives, with additional kudos to translator Coverdale for rendering their words in spare, haunting English....Hatzfeld is to be commended for helping to preserve crucial eyewitness testimony and for sharing it with what one hopes will be a very large audience.