War Against All Puerto Ricans: Revolution and Terror in America's Colony (Paperback) 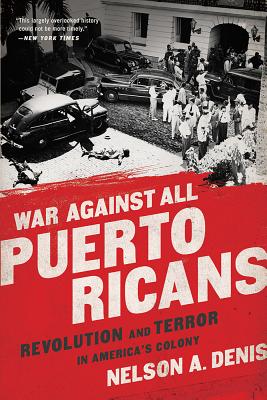 The powerful, untold story of the 1950 revolution in Puerto Rico and the long history of U.S. intervention on the island, that the New York Times says "could not be more timely." In 1950, after over fifty years of military occupation and colonial rule, the Nationalist Party of Puerto Rico staged an unsuccessful armed insurrection against the United States. Violence swept through the island: assassins were sent to kill President Harry Truman, gunfights roared in eight towns, police stations and post offices were burned down. In order to suppress this uprising, the US Army deployed thousands of troops and bombarded two towns, marking the first time in history that the US government bombed its own citizens.

Nelson A. Denis tells this powerful story through the controversial life of Pedro Albizu Campos, who served as the president of the Nationalist Party. A lawyer, chemical engineer, and the first Puerto Rican to graduate from Harvard Law School, Albizu Campos was imprisoned for twenty-five years and died under mysterious circumstances. By tracing his life and death, Denis shows how the journey of Albizu Campos is part of a larger story of Puerto Rico and US colonialism.

Through oral histories, personal interviews, eyewitness accounts, congressional testimony, and recently declassified FBI files, War Against All Puerto Ricans tells the story of a forgotten revolution and its context in Puerto Rico's history, from the US invasion in 1898 to the modern-day struggle for self-determination. Denis provides an unflinching account of the gunfights, prison riots, political intrigue, FBI and CIA covert activity, and mass hysteria that accompanied this tumultuous period in Puerto Rican history.

Nelson A. Denis was the editorial director of El Diario/La Prensa, the largest Spanish-language newspaper in NYC, and won the Best Editorial Writing award from the National Association of Hispanic Journalists. A graduate of Harvard University and Yale Law School, Denis served as a New York State Assemblyman (1997-2001) and has written for the New York Daily News, Newsday, and Harvard Political Review. Denis also wrote and directed the feature film Vote For Me!, which premiered in the Tribeca Film Festival.

"The writing is terrific...I found the footnotes and notes to be as fascinating and riveting as the narrative...Denis spent many years researching, reading, studying and analyzing, then has distilled a complicated history into a narrative that a general reader can understand and he's skillful in getting readers emotionally involved in the story." —Esmeralda Santiago, author of When I was Puerto Rican

"In addition to a ton of data, the book presents photographs of the key events. Denis reviews the relationship between the US and the island, focusing on how the US government used all of its powers to suppress any attempt at independence or Nationalism on the island." —Hermes Ayala, Diálogo UPR, University of Puerto Rico

"This book is important...Our history has been stripped from us...There is a war against all Puerto Ricans!" —Howard Jordan, WBAI Radio

"[Nelson Denis] provides scathing insights into Washington's response to Albizu Campos's nationalist party and its violent revolution in 1950 that still has broad implications...his perspective of largely overlooked history could not be more timely." —New York Times

"A pointed, relentless chronicle of a despicable part of past American foreign policy." —Kirkus Reviews

"A must-read...fascinating...This is not a novel, not a Hollywood script. This is actual history." —Gerson Borrero, City & State TV

“Reveals the true face of American imperialism in its own backyard… Denis's meticulous research reveals an often overlooked element of American history and provides context to the current status of Puerto Rico as a U.S. territory.” —Publishers Weekly

"An enlightening and engaging read...a must-read for anyone interested in learning more about Puerto Rico. Denis provides a more detailed account, thanks to exclusive interviews conducted over a span of decades, as well as thousands of public records, including recently de-classified FBI documents." —Andre Lee Muñiz, La Respuesta

"War Against All Puerto Ricans is a fascinating read...mind-blowing...women were sterilized, people were tortured, cities were bombed by US planes...A lot of Americans will learn a great deal from reading it. I know I did." —Jerome McDonald, WBEZ Worldview

"With War Against All Puerto Ricans, Nelson Denis doesn't just give us history. He gives us history on fire. This is a thoroughly researched indictment of over a century of U.S. policy toward one small island. Here we have a full-throated eulogy of brave heroes, men and women of conviction, who devoted every drop of their blood to a people and a principle...Denis packs 258 pages (plus another 71 pages of notes) with detailed accounts of government corruption, police abuse, Wall Street greed, scientific experimentation, politicking, graft, racism, wholesale slaughter, surveillance, assassinations, eugenics, propaganda, espionage, forgery and falsification — all within the span of half a century, and on an island no bigger than Connecticut." —Hector Luis Alamo, Gozamos

“A patient, calibrated, fully-researched study of the mendacious, hypocritical way the United States treats its Caribbean colony, castrating its leadership, bombarding its villages, experimenting biologically with its population. Puerto Rico is, in a word, el calabozo. Denis knows the truth first-hand and refuses to sugarcoat it.” —Ilan Stavans, author of Spanglish: The Making of a New American Language

“Sometime in the not-too distant future, we will resolve the relationship between the United States and Puerto Rico. To understand where we are going, we must know our past—both good and bad. War Against All Puerto Ricans fills an important gap in that historical understanding. It is a book that every student of the US–Puerto Rico relationship should read.” —Congressman José Serrano

“As more than a half century of failed US policy toward Cuba comes to a slow end, Nelson Denis's fascinating new book is a timely reminder of that other island in the Caribbean that the United States took possession of in 1898: Puerto Rico. War Against All Puerto Ricans is a remarkable history of a forgotten national liberation movement and Washington's brutal pacification campaign.” —Greg Grandin, professor of history at New York University and author of The Empire of Necessity