Making Sense of the Troubles: The Story of the Conflict in Northern Ireland (Hardcover) 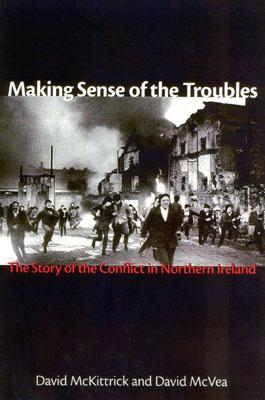 Compellingly written and even-handed in its judgments, this is by far the clearest account of what has happened through the years in the Northern Ireland conflict, and why. After a chapter of background on the period from 1921 to 1963, it covers the ensuing period--the descent into violence, the hunger strikes, the Anglo-Irish accord, the bombers in England--to the present shaky peace process. Behind the deluge of information and opinion about the conflict, there is a straightforward and gripping story. Mr. McKittrick and Mr. McVea tell that story clearly, concisely, and, above all, fairly, avoiding intricate detail in favor of narrative pace and accessible prose. They describe and explain a lethal but fascinating time in Northern Ireland's history, which brought not only death, injury, and destruction but enormous political and social change. They close on an optimistic note, convinced that while peace--if it comes--will always be imperfect, a corner has now been decisively turned. The book includes a detailed chronology, statistical tables, and a glossary of terms.

David McKittrick writes for the Independent and is a winner of the Orwell Prize for Journalism. In 1999 he was named correspondent of the year by the BBC's What the Papers Say. He has reported on Northern Ireland since 1973. David McVea was, for many years, head of the politics department at a leading Belfast grammar school. He now works for Northern Ireland's examinations board. With David McKittrick he helped to produce the book Lost Lives, which tells the stories of all those who died as a result of the Troubles.