Life in the Medieval University (Paperback) 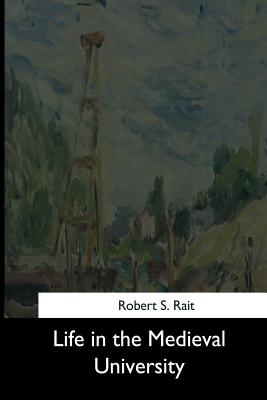 In this picture the schoolboy is seen arriving with his satchel and being presented with a hornbook by Nicostrata, the Latin muse Carmentis, who changed the Greek alphabet into the Latin. She admits him by the key of congruitas to the House of Wisdom ("Wisdom hath builded her house, she hath hewn out her seven pillars," Proverbs ix. 1). In the lowest story he begins his course in Donatus under a Bachelor of Arts armed with the birch; in the next he is promoted to Priscian. Then follow the other subjects of the Trivium and the Quadrivium each subject being represented by its chief exponent-logic by Aristotle, arithmetic by Boethius, geometry by Euclid, etc. Ptolemy, the philosopher, who represents astronomy, is confused with the kings of the same name. Pliny and Seneca represent the more advanced study of physical and of moral science respectively, and the edifice is crowned by Theology, the long and arduous course for which followed that of the Arts. Its representative in a medieval treatise is naturally Peter Lombard.