Not So Normal Norbert (CD-Audio) 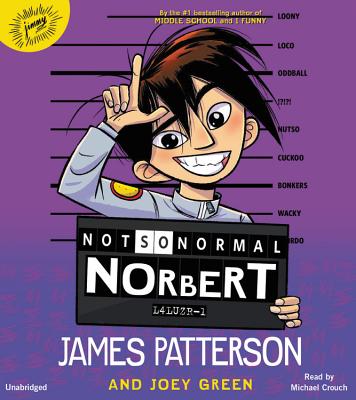 A kooky kid is banished to another planet in this hilarious adventure about a futuristic world where different is dangerous, imagination is insanity, and creativity is crazy!
Norbert Riddle lives in the United State of Earth, where normal means following the rules, never standing out, and being exactly the same as everyone else, down to the plain gray jumpsuits he wears every day. He's been normal his whole life -- until a moment of temporary hilarity when he does a funny impression of their dictator, Loving Leader . . . and gets caught!
Now, Norbert's been arrested and banished to planet Zorquat 3 in the Orion Nebula, where kids who defy the rules roam free in the Astronuts camp. Norbert has been taught his whole life that different is wrong, but everyone at Astronuts is crazy, creative, and insane!
Norbert wants nothing more than to go back to earth where things are awful but at least they're familiar. But he soon realizes that being different could be better -- and maybe the crazy farm is exactly where he belongs after all.

James Patterson received the Literarian Award for Outstanding Service to the American Literary Community from the National Book Foundation. He holds the Guinness World Record for the most #1 New York Times bestsellers, including Middle School, I Funny, and Jacky Ha-Ha, and his books have sold more than 350 million copies worldwide. A tireless champion of the power of books and reading, Patterson created a children's book imprint, JIMMY Patterson, whose mission is simple: "We want every kid who finishes a JIMMY Book to say, 'PLEASE GIVE ME ANOTHER BOOK.'" He has donated more than one million books to students and soldiers and funds over four hundred Teacher Education Scholarships at twenty-four colleges and universities. He has also donated millions of dollars to independent bookstores and school libraries. Patterson invests proceeds from the sales of JIMMY Patterson Books in pro-reading initiatives.
Joey Green, a former contributing editor to National Lampoon, is the author of more than sixty books. He has appeared on The Tonight Show, Good Morning America, The View, and other national television shows, and has been profiled in The New York Times, People, USA Today, and The Washington Post. A native of Miami, Florida, and a graduate of Cornell University (where he founded the campus humor magazine, the Cornell Lunatic, still publishing to this day), he lives in Los Angeles.

"Readers will chortle at the relentless wordplay, a supporting cast made up almost entirely of caricatured grown-ups and young pranksters, and Norbert's winning mix of glibness and gullibility. Aly's scribbly ink-and-wash line drawings add punchlines as well as comical portraits of the major characters."—Booklist

"Buoyed by Aly's boisterous drawings, Norbert's droll wordplay, wisecracking banter, and oddball characters, the comedy reaches farcical heights before careening to an unforeseen conclusion. The authors balance the inanity with real-life, affecting emotion, convincingly depicting Norbert's fright as well as his yearning for his parents."—Publishers Weekly

"The humor, adventure, and lively illustrations will make this book enjoyable for reluctant readers."—Common Sense Media