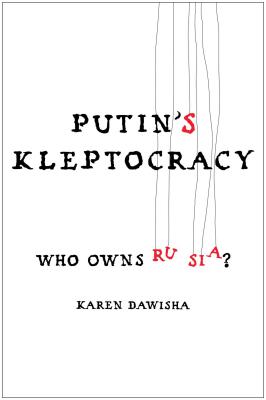 By Karen Dawisha
$30.00
Out of stock at the moment; would not arrive before the holidays.

The raging question in the world today is who is the real Vladimir Putin and what are his intentions. Karen Dawisha’s brilliant Putin’s Kleptocracy provides an answer, describing how Putin got to power, the cabal he brought with him, the billions they have looted, and his plan to restore the Greater Russia.

Russian scholar Dawisha describes and exposes the origins of Putin’s kleptocratic regime. She presents extensive new evidence about the Putin circle’s use of public positions for personal gain even before Putin became president in 2000. She documents the establishment of Bank Rossiya, now sanctioned by the US; the rise of the Ozero cooperative, founded by Putin and others who are now subject to visa bans and asset freezes; the links between Putin, Petromed, and “Putin’s Palace” near Sochi; and the role of security officials from Putin’s KGB days in Leningrad and Dresden, many of whom have maintained their contacts with Russian organized crime.

Putin’s Kleptocracy is the result of years of research into the KGB and the various Russian crime syndicates. Dawisha’s sources include Stasi archives; Russian insiders; investigative journalists in the US, Britain, Germany, Finland, France, and Italy; and Western officials who served in Moscow. Russian journalists wrote part of this story when the Russian media was still free. “Many of them died for this story, and their work has largely been scrubbed from the Internet, and even from Russian libraries,” Dawisha says. “But some of that work remains.”

Karen Dawisha is the Walter E. Havighurst Professor of Political Science in the Department of Political Science at Miami University in Oxford, Ohio, and the director of the University’s Havighurst Center for Russian and Post-Soviet Studies. She has written five previous books, eight edited volumes, and numerous journal articles, and continues to do research and teaching in the areas of post-communist transitions and Russian politics.

“[A] copiously researched account . . . the most persuasive account we have of corruption in contemporary Russia. Dawisha won’t be getting a Russian visa anytime soon. Her indictment—event if it wouldn’t stand up in a court of law—hits Putin where it really hurts.”
— New York Times Book Review

“An important and valuable work”
— The Wall Street Journal

“[Dawisha] makes extensive use of the work of others, both fellow political scientists as well as journalists working across the US and Europe. . . . the resulting work has a certain admirable relentlessness. For by tying all of these disparate investigations together so thoroughly, so pedantically, and with so many extended footnotes—and by tracking down Western copies of documents that vanished from Russia long ago—the extent of what has always been a murky story suddenly becomes more clear. . . . [Dawisha] turns a relentless focus on the financial story of Putin’s rise to power: page after page contains the gritty details of criminal operation after criminal operation, including names, dates, and figures. Many of these details had never been put together before.”
— Anne Applebaum

“A who’s who of the people on the sanctions lists drawn up by America and the EU. It is also a guide to the crony capitalism that grew out of the nexus of Mr. Putin’s plutocratic interests, his shady past and authoritarian rule.”
— The Economist

“Putin’s Kleptocracy should be on the reading list of anyone who wishes to understand the true nature of Putin’s regime, which, as Dawisha correctly states, is ‘committed to a life of looting without parallel.’”
— Washington Free Beacon

“A rich and exhaustive account of Putin and his regime . . . Among Dawisha’s many contributions to our understanding of post-Soviet politics, this book may be the most significant, as the author combines an analysis of such politics and a biography of Russian president Vladimir Putin in unrivaled detail. . . . The notes in this volume represent one of the finest and most imaginative uses of published source materials that this reviewer has ever seen in a book on post-Soviet politics.”
— Library Journal (starred review)

“A damning account of Vladimir Putin's rise to power and of the vast dimensions of the corruption—political and economic—that both reigns and rots in Russia. . . . Dawisha's research is extremely impressive. . . . The light of Dawisha's research penetrates a deep moral darkness, revealing something ugly—and dangerous.”
— Kirkus Reviews (starred review)

“A devastating dossier on what history may recognize as a state system that served mainly as a cover for the criminal looting and victimization of the people whose self-sacrificing patriotism it so cynically and shamelessly manipulated.”
— The Washington Times

“[An] important new book . . . [Dawisha] has compiled an extraordinary dossier of malfeasance and political corruption on an epic scale. . . . Dawisha is the first Western author to have pieced together all the relevant material . . . Above all, she charts the extraordinary accumulation of wealth and power by Putin’s associates and friends over a period of two decades. . . . Dawisha has done us all a service in her meticulous account . . . Putin’s Kleptocracy is a courageous and scrupulously judicious investigation into the sinews of wealth and power in Vladimir Putin’s Russia.”
— Richard Sakwa

“A long-time Russia scholar . . . Dawisha spent almost eight years researching her book. . . . In studying high-level corruption under the Putin regime, Dawisha does a thorough job of analysing the relevant material in the historical archives and court records, and collating reports in the Russian and western press. The power of her argument is amplified by the coolness of her prose.”
— Financial Times

“A meticulous exploration of the myriad economic crimes associated with Putin and his friends, allies and cronies. . . a classic . . . [Dawisha] uncovers entirely irrefutable proof that massive and institutionalized fraud and embezzlement took place in Putin’s circle. Most impressive of all, she does so largely based on open source materials: a testament to what can be accomplished with diligence, time, and a detailed, forensic approach. . . . What emerges is confirmation, if any were needed, that corruption is not simply a lamentable byproduct of the current authoritarian mode of rule, it is a central gear of the machine, a means of compromising and controlling yet also rewarding and socializing the elite.”
— Quartz

"A rare book—one that attracts a wide readership and at the same time makes a substantial contribution to the academic literature. . . . painstakingly assembles evidence to document the corrupt circle of insiders around Putin that emerged from the ranks of the Communist Party and the KGB. It is a damning picture . . ."
— CHOICE