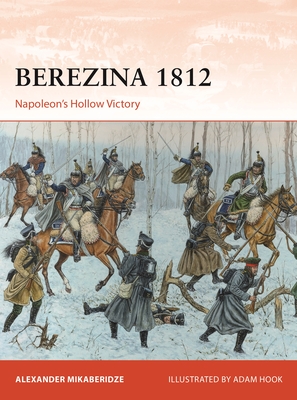 A superbly illustrated narrative of how Napoleon skilfully extracted his Grande Armee from the clutches of the pursuing Russian armies.

Much has been written about the Battle of the Berezina and the 1812 Russian campaign in general, during which the cold winter devastated the Grande Armée. Historians often praise Napoleon for his actions at the Berezina and attribute his success to a brilliant strategic mind, laying a trap that deceived the Russians and resulted in a remarkable feat in the history of warfare.

Drawing on contemporary sources (letters, diaries, memoirs), and featuring an extensive order of battle, this book recreates in hourly detail one of the great escapes in military history, a story often told with embellishments that require a more critical examination. Although the core of Napoleon's army escaped, tens of thousands were killed in the battle, trampled in the rush for the bridge, drowned in the icy waters of the Berezina, or captured.

Written by an acknowledged expert on the period, and using a broad range of sources from all sides, this title brings to life in stunning visual detail, using maps, battlescene artworks and period illustrations, the events of late November 1812, as Napoleon's retreating, desperate Grand Armée extricated itself from the clutches of the Russian armies under Kutuzov, Wittgenstein and Chichagov in an epic feat of heroism and masterful tactics.

Alexander Mikaberidze is Professor of History and the Ruth Herring Noel Endowed Chair at Louisiana State University Shreveport. He is an internationally acclaimed historian of the Napoleonic Wars, and the author and editor of two dozen books, including The Napoleonic Wars: A Global History (Oxford, 2020) and a trilogy on Napoleon's invasion of Russia.

Adam Hook studied graphic design, and began his work as an illustrator in 1983. He specializes in detailed historical reconstructions, and has illustrated Osprey titles on subjects as diverse as the Aztecs, the Ancient Greeks, Roman battle tactics, 19th-century American subjects, the modern Chinese Army, and the history of fortification. His work features in exhibitions and publications throughout the world.