The Silver Bayonet: A Wargame of Napoleonic Gothic Horror (Hardcover) 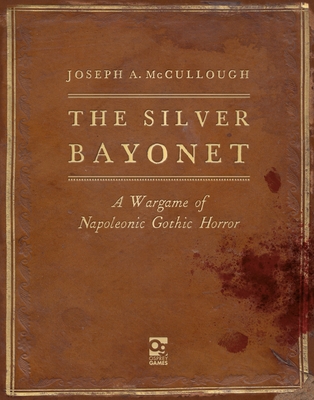 A skirmish wargame of gothic horror during the Napoleonic Wars written by the Joseph A. McCullough, the award-winning creator of Frostgrave.

As the wars of Napoleon ravage Europe, chaos and fear reign and the darkness that once clung to the shadows has been emboldened. Supernatural creatures--vampires, werewolves, ghouls, and worse take advantage of the havoc, striking out at isolated farms, villages and even military units. Whether they are pursuing some master plan or simply reveling in their newfound freedom is unknown. Most people dismiss reports of these slaughters as the rantings of madmen or the lies of deserters, but a few know better…

In Britain, a secret award--the Silver Bayonet--is presented to those soldiers brave or fortunate enough to have faced these creatures and survived. Often, these survivors are swiftly seconded to a specialist unit and ordered to report to one of Wellington's exploring officers. Formed to root out and destroy the supernatural menace, these small units are tasked with investigating strange reports, scouring battlefields, and seeking out allies and artifacts that could stem the tide. Britain is not alone in this fight--the other great nations have their own units dedicated to the fight against the supernatural--but that is not to say that mankind is united in the face of the rising darkness. While the rising darkness is a common foe, and rival units may forge uneasy and fleeting alliances, patriotism and national interest will just as often pit them against each other in races for ancient knowledge or forgotten treasure.

The Silver Bayonet is a skirmish wargame of gothic horror set during the Napoleonic Wars. Each player forms an elite band of monster hunters drawn from the ranks of one of the great powers. Riflemen, swordsmen, and engineers fight side-by-side with mystics, occultists, and even those few supernatural creatures that can be controlled or reasoned with enough to make common cause. The game can be played solo, co-operatively, or competitively, with players progressing through a series of interlinked adventures with their soldiers gaining experience and suffering grievous wounds and their units triumphing… or falling in the face of the shadows. It is a game of action and adventure, where musket and sabre meet tooth and claw.

Joseph A. McCullough's first brush with writing for games was as co-author of The Grey Mountains supplement for the Middle-Earth Role-Playing Game, and he has remained passionate about Fantasy gaming since, going on to become an award-winning game designer. He is the creator of the “Frostgrave Family” of skirmish wargames (the Fantasy titles Frostgrave, Ghost Archipelago, Rangers of Shadow Deep, and the Sci-Fi evolution, Stargrave) and of the Oathmark Fantasy battle game and The Silver Bayonet, a game of Napoleonic Gothic Horror. His continued ramblings can be read at: therenaissancetroll.blogspot.co.uk

Brainbug Design is a 2D conceptual art, illustration, and visual development studio embedded within the entertainment industries. Based in Nottingham, UK, Brainbug was founded in 2018 by industry veterans with over 30 years' combined experience and one singular goal: to burrow deep into intellectual properties to provide the best possible external symbiosis with the host-client! Deeply passionate about world-building and storytelling through the medium of design, Brainbug has collaborated on everything from film and television to giant AAA titles and compact independent video games.

"Horror games set in Napoleonic Europe, I'm pretty pumped for this. I think it's gonna be a lot of fun" - Ash Barker, GMG Reviews

“McCullough has proved his pedigree with his games so far… an interesting option for those of a more historical persuasion and those who like their horror and fantasy." - OnTabletop

"The rules are refined, matches are tense and tight, and the narrative side of the game can be as focused or supplemental as you like. Most importantly, this might be the best jumping-on point for those totally new to small skirmishers." - Wargamer