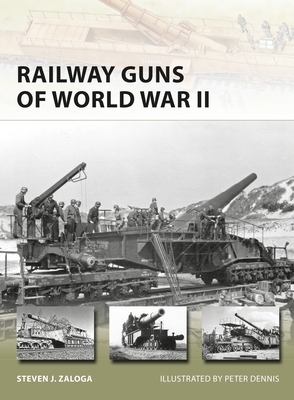 This is book number 231 in the New Vanguard series.

World War II marked the zenith of railway gun development. Although many of the railway guns initially deployed at the start of the conflict were of World War I vintage, Germany's ambitious development program saw the introduction of a number of new classes, including the world's largest, the 80cm-caliber Schwerer Gustav and Schwerer Dora guns, which weighed in at 1,350 tons and fired a huge 7-ton shell.

This book provides an overview of the types of railway guns in service during World War II, with a special focus on the German railway artillery used in France, Italy, and on the Eastern Front, analyzing why railway guns would largely disappear from use following the end of the war.

Peter Dennis was inspired by contemporary magazines such as Look and Learn, leading him to study Illustration at Liverpool Art College. Peter has since contributed to hundreds of books, predominantly on historical subjects, including many Osprey titles. A keen wargamer and modelmaker, he is based in Nottinghamshire, UK.

"This is an extremely interesting book, by an excellent author, with very good illustrations. Anyone interested in coastal defense or artillery should find it enjoyable and informative." - Coast Defense Journal

"I found this book quite fascinating. Railway Guns of World War II explains an area of rail operations that is rarely covered." - Model Railroader News

"If you enjoy history and want to find something different you might scratch­build for your layout, you had best look into Railway Guns of WWI and Rail­way Guns of WWII. I enjoyed them; I bet you will also." - Railroad Model Craftsman