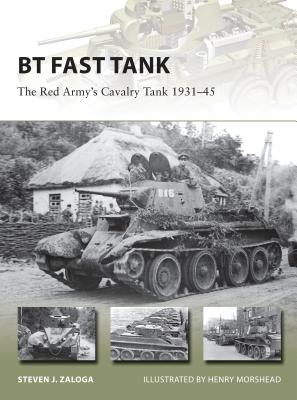 This is book number 237 in the New Vanguard series.

When the Red Army needed to mechanize its cavalry branch in the 1930s, the BT fast tank was its solution. Channeling the American Christie high-speed tank, the Red Army began a program to adapt the design to its own needs. Early versions were mechanically unreliable and poorly armed, but by the mid-1930s, the BT-5 emerged, armed with an excellent dual-purpose 45mm gun. It saw its combat debut in the Spanish Civil War in 1937 and was later used in the border battles with the Japanese Kwantung Army in the late 1930s. The final production series, the BT-7, was the most refined version of the family.

One of the most common types in Red Army service at the beginning of the Second World War, BT tanks saw extensive combat in Poland, Finland, the opening phases of Operation Barbarossa in 1941, and the 1945 campaign against the Japanese in Manchuria. This is the story of their design and development history.

Henry Morshead is the Chief Designer for the Hill HX50 helicopter. He also works in the automotive and bespoke sectors, with clients including BAC Mono and Arrival, and is a STEM Ambassador with the Bloodhound supersonic car project. A former officer in the Royal Engineers and illustrator for Jane's, he maintains a keen interest in the design and use of military land and air vehicles.

"I found it to be a most interesting read and learned quite a bit about this interesting vehicle. I can assure you that you will like it as well." - Modeling Madness