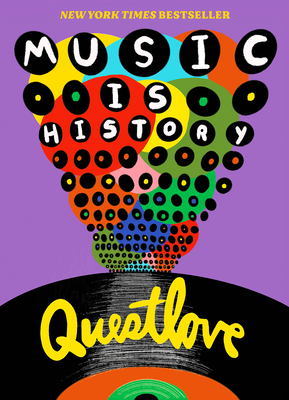 New York Times bestselling Music Is History combines Questlove’s deep musical expertise with his curiosity about history, examining America over the past fifty years—now in paperback

Focusing on the years 1971 to the present, Questlove finds the hidden connections in the American tapes, whether investigating how the blaxploitation era reshaped Black identity or considering the way disco took an assembly-line approach to Black genius. And these critical inquiries are complemented by his own memories as a music fan and the way his appetite for pop culture taught him about America. A history of the last half-century and an intimate conversation with one of music’s most influential and original voices, Music Is History is a singular look at contemporary America.

Drummer, DJ, producer, culinary entrepreneur, New York Times bestselling author, and member of The Roots Ahmir “Questlove” Thompson is the unmistakable heartbeat of Philadelphia’s most influential hip-hop group. He is the musical director for The Tonight Show Starring Jimmy Fallon, where his beloved Roots crew serves as house band. Beyond that, this five-time Grammy Award–winning musician’s indisputable reputation has landed him musical-directing positions with everyone from D’Angelo to Eminem to Jay-Z. Questlove has also released multiple books, including the New York Times bestsellers Mo’ Meta Blues and Creative Quest, the Grammy-nominated audiobook Creative Quest, Soul Train: The Music, Dance and Style of a Generation, James Beard Award–nominated somethingtofoodabout, and, most recently, Mixtape Potluck Cookbook.

Questlove and Black Thought of the Roots have executive produced the acclaimed documentary series Hip-Hop: The Songs That Shook America on AMC under their production company, Two One Five Entertainment, which recently announced a first-look deal with Universal Television to develop scripted and non-scripted programming. Questlove will serve as executive producer for the upcoming documentary The League, centered on the tumultuous journey of Negro League baseball. He also made his directorial debut with the acclaimed feature documentary Summer of Soul, which explores the legendary 1969 Harlem Cultural Festival. The film premiered on the opening night of the 2021 Sundance Film Festival in January, where it was awarded the Grand Jury Prize and Audience Award for Best U.S. Documentary. The film most recently broke the record for the highest-selling documentary to come out of Sundance when it was acquired by Searchlight/Hulu. Questlove is also set to direct an upcoming Sly Stone feature documentary.

Questlove has cemented himself as one of the most sought-after DJs in pop culture, with a resume that includes gigs for the Academy Awards, the Golden Globes, the White House, Cartier, and hotels and nightclubs around the world. After streaming nearly three hundred virtual DJ sets in 2020, he has used this momentum to launch his own Twitch show called GO DJ, which champions sets from renowned international peers.

“Music Is History is an entertaining, informative and far-reaching work, meticulously excavating American culture and history with the eye of a seasoned cratedigger.”
— The Washington Post

“This inspired volume continues Questlove’s thoughtful and thought-provoking work and is an enduring analysis of the effects of music on personal, political, and cultural histories.”
— Library Journal STARRED Review

“A palimpsestic, personal, and resonant journey with a living musical encyclopedia.”
— Kirkus

“This stimulating work is sure to attract deep thinkers and music theorists everywhere.”
— Publishers Weekly